June 30th 1968 was the "happiest day" for some 20,00 invited "guests", including army, navy, and air-force personnel from Jinan, Guangzhou and Lanzhou military areas, representatives of the national coal industry and other revolutionary workers, cadres, and war veterans. The cause of this singular happiness was an evening (6:30pm) reception hosted by Chairman Mao, on this occasion accompanied by Vice-Chairman Lin. 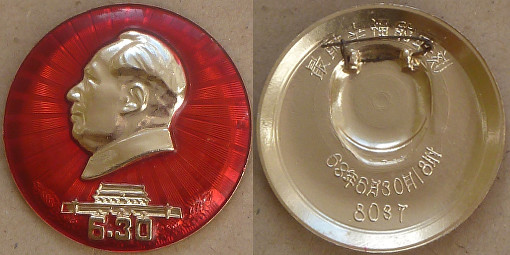 The June 30th event was one of nineteen receptions by the Chairman taking place between 1967 and 1969 that were listed*, along with the eight Red Guard rallies in 1966, as significant milestones in the progress of the Cultural Revolution. For some of those who attended, such Unit 7001 on Hainan which was then part of Guangdong Province, it had sufficient importance for them to commemorate the anniversary (at right below) one year later.