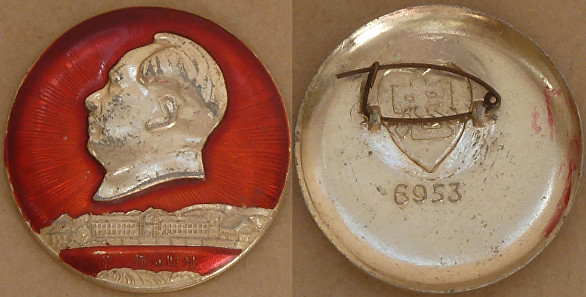 This badge issued by PLA unit 6953 depicts Mao's alma mater. The Western-style building, once considered the most modern in Changsha, is named on the obverse as the "Former Site of Third* Normal School". In 1913, the year following the abdication of the last emperor, Mao Zedong enrolled in this teacher training college. Soon afterwards the Third School merged with the larger Hunan First Normal School, which has been identified by several writers as playing an important role in the birth of communism in China.

The building is now part of Hunan First Normal University, and houses a small Mao museum. 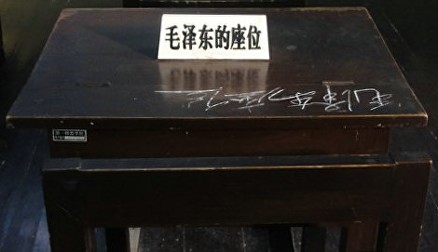 Mao stayed at the school for five years and the people and ideas he encountered had a major impact on his intellectual development. His friend and fellow student Cai Hesen wrote to Mao from Paris enthusiastically introducing him to Leninism; and under his professor, Yang Changji, he carefully (and notoriously) studied the German philosopher Friedrich Paulsen. His notes and musings about Paulsen are often used to support the "Mao as monster" thesis. Mao became extremely close his professor, despite studying Western ideas they were both ardent patriots. After Yang's untimely death from illness Mao married his daughter Yang Kaihui.

* Pantsov and Levine state that Mao enrolled in the Hunan Provincial Fourth Normal School (Mao: The Real Story p.37); however the inscription on this Maozhang clearly identifies the institution as the Third Normal School.