This badge was issued by the revolutionary committee of the Changan Factory, which had its origins in the Jinling Arsenal established in Nanjing in 1865. By the turn of the century Jinling had become China's largest producer of rifles, machine guns and small cannon. In 1937 it was relocated to Chongqing and renamed the 21st Arsenal. After Liberation it became the State Armed Forces Bureau 456 Factory - the Changan Machine Manufacturing Plant. 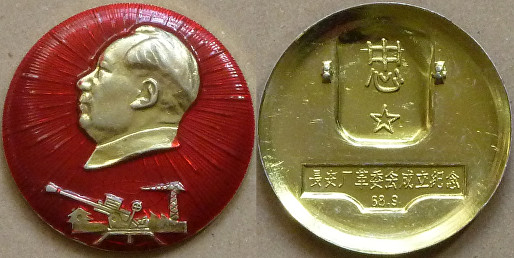 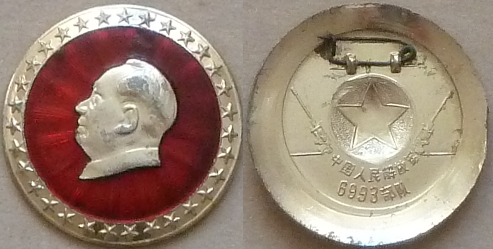 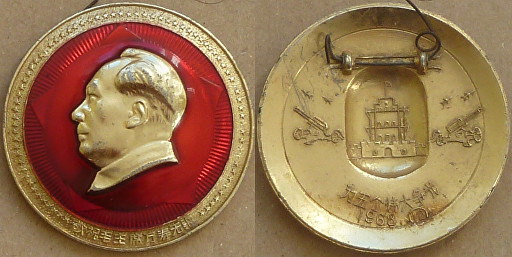 Against a background of the factory buildings and heavy equipment the badge portrays what was then its best-known product - the 12.7mm Type 54 "high-altitude" machine gun, an improved version of the 1938 Soviet DShK manufactured specifically as an anti-aircraft weapon. During the Korean War the PLA had learned a costly lesson about the value of close air-support, and the Type 54 was their man-portable response. It proved highly effective in the Vietnam War, operated by Vietnamese regulars and militias and by Chinese troops sent across the border to assist with air defence.

The badge at left was issued by PLA Unit 6993, which was undoubtedly an anti-aircraft battalion. Although the identification is uncertain, it is likely that the guns portrayed on the reverse are the 100mm Type 59 (a Chinese-made version of the Soviet KS-19), which required a crew of 15 and was used to defend important static targets such as ports, airfields and marshalling yards.