Chairman Mao Walks To Anyuan by Liu Chinhua is a propaganda piece pure and simple. Exhibited in 1968 and receiving official approval, it became extremely popular, with an estimated 900 million copies printed before the end of the Cultural Revolution. The painting depicts a young Mao Zedong wearing a scholar's robe and carrying naught but an umbrella, striding purposefully towards Anyuan in April 1921 to organize striking miners. The background is a landscape of forest-clad mountains and mist-filled valleys. Apart from Mao, the only hint of human presence is near the bottom-right corner where smoke rising from tall chimneys mingles with the mist. Although this cannot be intended to represent Anyuan, it is suggestive of the extractive industries that exploited the miners. It is a highly effective work, conveying both missionary zeal and calm determination; however it is at best a gross oversimplification of actual events.

Mao first visited the Anyuan district (Pingxiang county) in November 1920 attracted by reports of rowdy and rebellious peasants. He did not visit the mine until the autumn of 1921, when he arrived on a fact-finding mission wearing a long blue gown and carrying an umbrella. His intention was to investigate the possibilities of starting a school for the miners' children. Mao returned to Anyuan with other activists, including Li Lisan, in December 1921 to make definite plans for a school. After they returned to Changsan, he selected Li to go back to Anyuan to open a school. 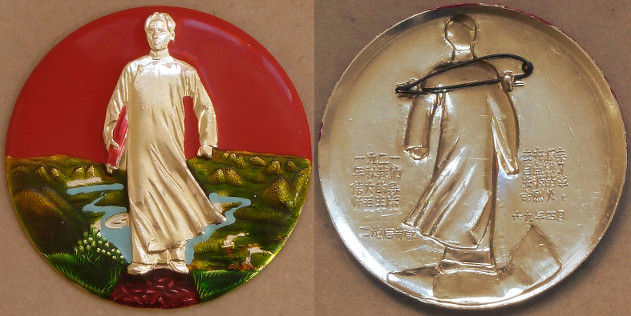 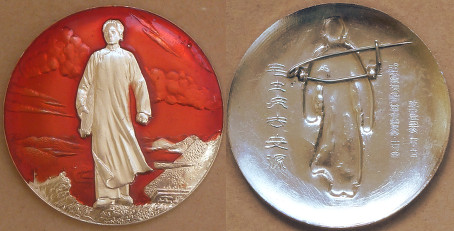 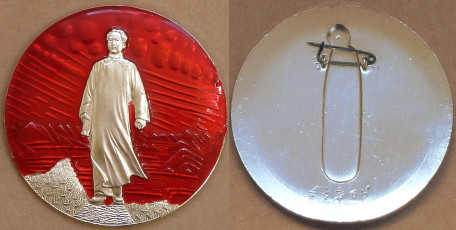 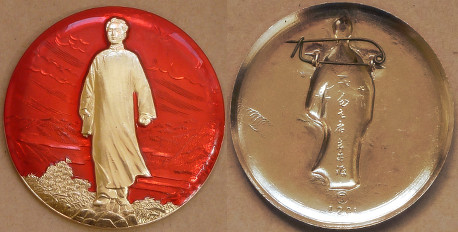 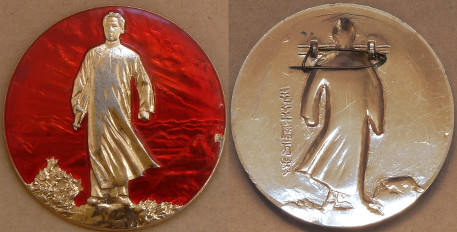 The inscription on the reverse of this delicately painted badge repeats the strapline of the printed poster, "In the autumn of 1921, our great leader Chairman Mao went to Anyuan, and personally sparked off the revolutionary fervour of Anyuan".

Jump forward 40 years from the strike to 1962. Mao is Chairman of the Communist Party of China, and Liu is President of the People's Republic of China. Liu commissioned a painting of the Anyuan strike that showed him in the vanguard of an advancing column of angry miners, and some 200,000 copies were distributed as posters. In the same year he published a revised edition of his book How to be a Good Communist. For those with suspicious minds, these actions were indicative of an ambition to replace Mao. By 1968 Liu had been denounced as the "chief capitalist-roader in a position of authority". The publicity given to Chairman Mao Walks To Anyuan was not so much an attempt to put the record straight, as to put the record as Mao wished it to be seen.

Most aluminium Maozhang feauring this scene have only red paint and less precisely appropriate inscriptions. 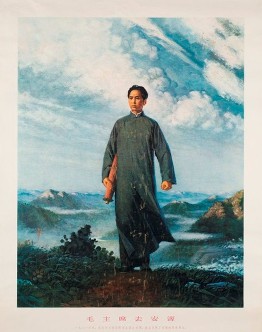 Within a year the school begat a night school for the pupils' fathers, which begat a workers club, which begat a Communist Party cell. By the autumn of 1922, Li Lisan's success convinced Mao that the time was ripe for a strike and he instructed Li to make preparations. Mao also sent Moscow-trained Lui Shaoqi to assist Li and be a calming influence on Li's fiery temperament. The strike by 10,000 miners and 1,500 railway workers began on 14th September 1922 and, with the connivance of the local Red Gang secret society and non-intervention by the local military commander, was a complete success. Discipline was excellent and five days later the mining company agreed to most of the strikers' demands for back pay and improved working conditions. As Mao had anticipated, Lui proved more adept than Li at negotiating with company officials. For a few brief years Anyuan was known as China's Little Moscow, and the 1922 strike became enshrined Communist Party history.

The brief treatment of Anyuan in A History of the Modern Chinese Revolution by Ho Kan-chin (Foreign Languages Press, Peking 1959, pp55-57) mentions neither Mao nor Li, and says it was "Comrade Liu Shao-chi who was leading the strike".