Mao's 1942 Talks at the Yan'an Forum on Literature and Art set the tone for the next 35 years. There was to be no more art for art's sake; creative work of all kinds was to "serve the workers, farmers and soldiers". For visual artists this meant adapting their work to suit their audience - peasants in liberated areas. Additionally their work had to promote party policy and raise the aesthetic standards of the peasantry to wean them off traditional depictions of gods and emperors.

Western art movements from the Impressionists onwards were rejected absolutely; art was to be representational and the mandated style was socialist realism merging into socialist romanticism. While Soviet-style oil painting became the preferred medium for "history" paintings of significant events, national pride required a Chinese national style. Traditional Chinese guohua (national painting), which depicted birds, flowers and landscapes in ink on paper or silk, were not suitable to Mao's purpose and considerable effort was expended to encourage and train existing artists to include people in their compositions, preferably observed from real life. Workers, peasants and soldiers who displayed artistic talent were sent to newly established art schools. 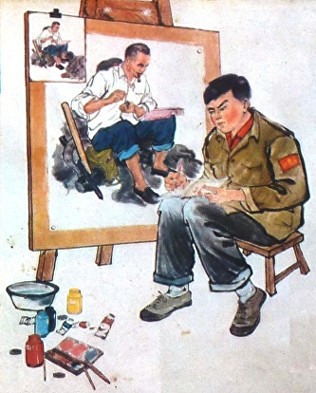 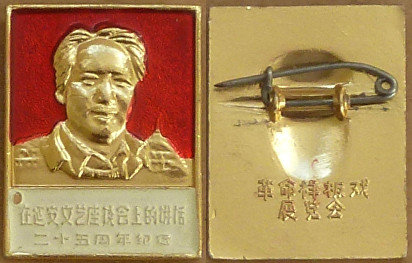 This 1975 illustration shows a young activist making a copy of the much-praised 1973 work Old Party Secretary by the Hu'xian peasant artist Liu Zhide.

The same slogan (written in different styles) appears on the obverse of the two badges below. The badge at left has the reverse inscription, Guanxi Red Culture 9th June 1968. The badge at right, which features a small group of figures surrounded by red flags, has a reverse inscription that commemorates the establishment of a revolutionary committee at Guangxi Arts Institute in November 1968. 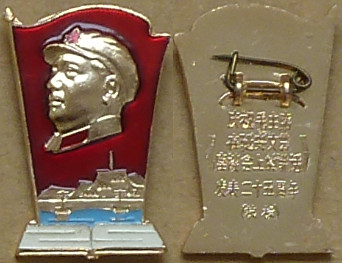 The two badges above were issued to commemorate the 25th anniversary of Mao's 1942 Talks  at the Yan'an Forum on Literature and Art. The badge at left commemorates the 26th anniversary and has the obverse slogan, "Art and literature are to serve the workers, farmers and soldiers", a quotation from the talks and rendered in Mao's calligraphy.