Seven stars form a northern-hemisphere constellation that is variously known as Ursa Major (the Great Bear), the Plough, the Big Dipper, and in China asthe Northern Dipper.

There is no scientific rationale for it being ranged alongside atomic power on this badge.

It is possible that its inclusion is a reference to Mao as the Northern Star (Polaris), which is located at one end of the constellation. Equally likely is that it is included as a traditional Daoist auspicious/apotropaic symbol associated with the God of the North Pole, as demonstrated by this 19yh-century coin-shaped amulet.

A third explanation is that the designer needed something to balance the composition and chose the constellation simply because of the suitability of its shape. 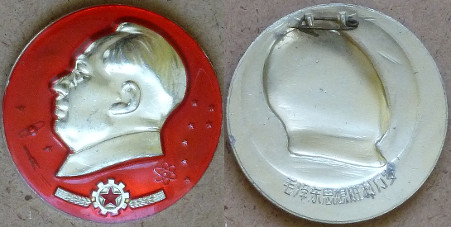