Atomic power was just one of the many "victories", along with electrification and increased steel production, that had been won during the first 20 years of the PRC.

The mushroom cloud was perhaps the most  significant and potent symbol that China had indeed stood up in the world. 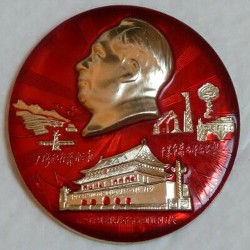 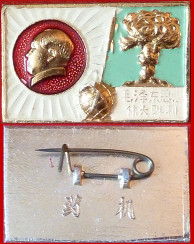 During the early phase of the Cultural Revolution there were four atomic tests that may have prompted the issue of this badge and many others like it:

The May and December 1966 tests were both claimed to have some thermonuclear component, but the June 1967 test was China's first true hydrogen bomb. It was publicly  celebrated in many Chinese cities (e.g. Red-Color News Soldier page 176).

The presence of a rocket on most of the badges makes it tempting to assign them to the October 1966 test; however it seems more likely that it was China's first hydrogen bomb (achieved in record time) that was commemorated/celebrated/publicized by this badge.

Image and caption from a Primary School Maths textbook published in 1970 by the Xinhua Bookshop for pupils in Suzhou.

An extremely similar depiction on this badge was obviously copied from the same masthead book, or an earlier schoolbook, because the badge almost certainly dates from 1967-69