While celebrating the good, it is also necessary to acknowledge the bad.

Most Maozhang were visually competent and some were, and are, truly beautiful; but occasionally the infinite creativity of the people produced some notable design failures.

The industrial proletariat were in the vanguard of socialism, but giving due prominence to the workers was not always an easy task - cogwheels are tricky things: too small and they can be overlooked, too large and they can be incongruous. 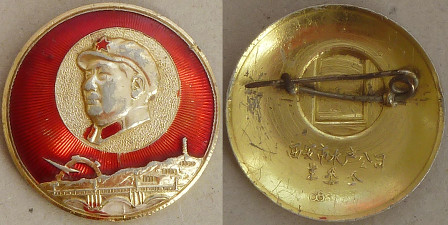 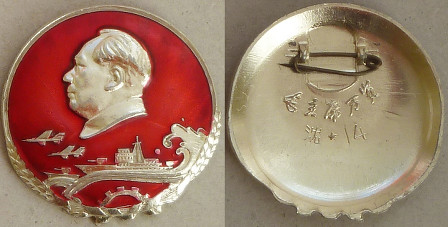 Despite a convergence of meaning, symbols, like metaphors, cannot always be combined to coherent effect.

Yan'an, with its distinctive pagoda and cave dwellings, is many miles from the sea

By emphasising the cogwheel in combination with a towering wave astern and a precipitous descent at the bow, the designer has unintentionally created a visual dynamic - is the wheel creating the turbulence, or is the wave driving the wheel?

For reasons that can only be imagined, the familiar skyline has been "enhanced" by a huge and almost toothless wheel - a proposed Yan'an Eye? - pierced by a Populuxe-style boomerang representing an aircraft. 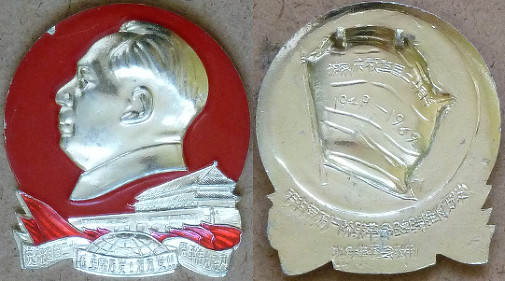 Celebrating the 20th National Day, the designer has shown the lower part of the south face of Tiananmen almost directly from the front, so that the slogans - at left, "Long Live the People's Republic of China" and at right, "Long Live the Great Unity of the World's Peoples"- can be read (with a magnifying glass). But rendering the upper stories from the same angle would have encroached on, or diminished, Mao's portrait. The unhappy solution was to draw the upper part from a different perspective, completely negating Tiananmen's image of harmonious symmetry.