Bombard the Headquarters - My Big Character Poster was the title of a text scrawled by Mao on an old newspaper one afternoon during the hastily-convened 11th plenum in August 1966. The text was neatly copied and copies were distributed to attendees the following day. It was intended as an "internal" document (although it was immediately leaked), and was not made public until a year later. For those in the know, it was a thinly-veiled attack on Mao's closest political rival, Liu Shaoqi. The text accused "some leading comrades" of having "enforced a bourgeois dictatorship" against the Cultural Revolution; a reference to the suppression of revolutionary activity in universities by Liu's work teams. 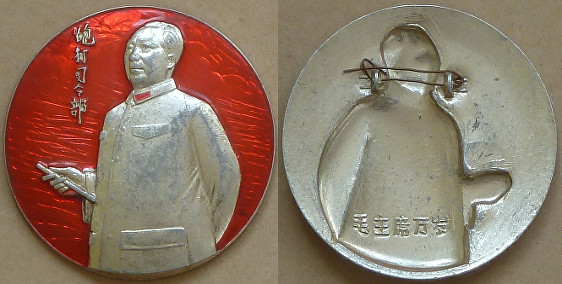 Big character posters - complaints and grievances writ large and pasted up for all to see - were nothing new, and had long been a part (albeit fairly minor) of Chinese social and political life. Following the announcement of the Cultural Revolution in May, some students at Beida University made a big character poster denouncing the university administration. This was brought to Mao's attention and he ordered it reprinted in the People's Daily, describing it as the first Marxist-Leninist big character poster. Within days thousands, and soon tens of thousands, of big character posters covered walls and buildings in cities throughout China, contributing greatly to the "chaos" that Liu's work teams were sent to check. By selecting that particular format, handwritten on newspaper, and by pointedly lifting the phrase, "bombard the headquarters" from one of Liu's own speeches, Mao skewered his target very neatly.

The above badge, dated New Year's Day 1969, shows Mao holding My Big Character Poster in his left hand. The obverse inscription reads, "Arousing the millions of workers and peasants". On the reverse the right-hand inscription incorporates the title of Jiang Qing's pamphlet, "In the new year achieve new things for the people".

The badge at right has the obverse inscription, "Bombard the headquarters: My big-character poster. Mao Zedong". What remains of the reverse inscription refers of the formation of a revolutionary committee in 1969; the rest of the inscription was rendered illegible subsequent to manufacture (as evidenced by the removal of the anodised finish), possibly because it contained a reference to Lin Biao.