Birds make infrequent appearances on Maozhang. Those most commonly seen, and probably least noticed, are the seagulls depicted above various versions of the passenger liner as ship-of-state. Seagulls have no revolutionary significance. They may, as real sea birds often do, indicate that the ship is not far from land; a more likely explanation is that they were added by the designers to enhance a perfect picture. 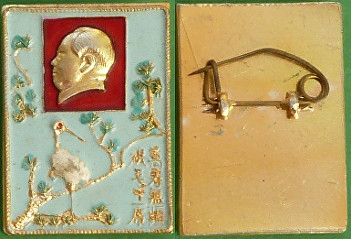 Migratory wild geese were used in Chinese poetry to symbolize seasonal change - flying north in spring and south in autumn. A single goose in flight, usually carrying a packet or envelope in its beak, is a traditional symbol for the arrival of good news. The importance of the news is greatly enhanced if the bird depicted is a swan, which is literally a "heavenly goose". 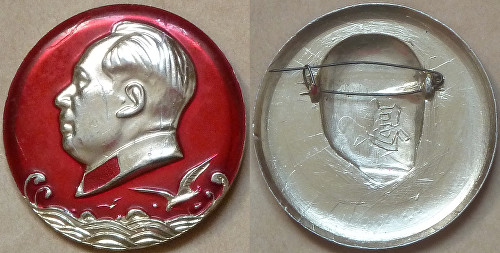 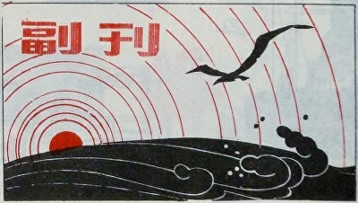 The badge at right commemorates the establishment of a Red Guard group at Sichuan University one week after Mao's endoresement of the Red Guards at a dawn rally in Tiananmen Square. The good news carried by the bird was undoubtedly the arrival of the Cultural Revolution.

The significance of a lone seabird skimming the wave creasts is unknown; similarly obscure is the suitability of this image for a "Supplement".

On the badge at left the good news was the success of the Ninth National Congress, which is named on the banners trailing from the balloons. An unusual feature is that Mao's portrait is surrounded by an incised groove, possibly as a physical deterrent to the blemishing of the Chairman's visage by carelessly applied red coating. Also noteworthy is that while for the obverse a new die was skillfully engraved, with small legible characters, for the reverse an existing die was recycled with its obviouly unsuitable inscription crudely obliterated. 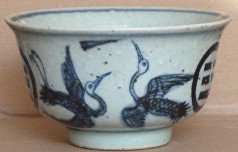 According to traditional symbolism, a picture of two cranes flying skywards expresses the wish that the recipient of the picture will rise to a high position. In the case of the badge above this wish has already been achieved and the inclusion of two birds may simply indicate a doubling of longevity.

Traditional symbols are now used decoratively without reference to their meaning. The two cranes on the 21st-century artisanal bowl at left are combined with the "thunder" trigram.