In addition to their role in communicating "official" policy and opinion, the state-controlled broadcasting media also participated directly in the Cultural Revolution. They attended rallies, held struggle sessions, organized Mao Zedong Thought Study groups, and commissioned Maozhang to be worn by their staff and presented to visitors. 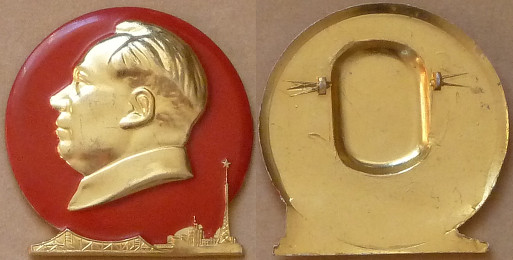 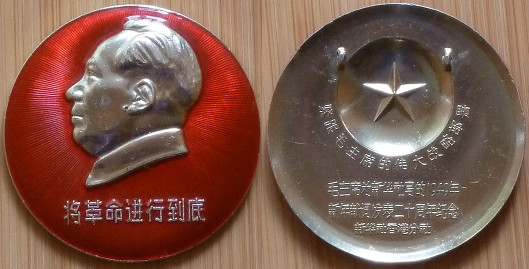 This badge was issued by Beijing Television in December 1968 commemorating the fourth anniversary of the Chairman's calligraphic inscription (shown on the obverse) written on 27 December 1964.

"The comrades of the Broadcasting Station have won the power of control.

It is a good thing that power is now in the hands of proletarian revolutionaries."

Issued by the Hong Kong bureau of the Xinhua News Agency, the badge at left commemorates the 20th anniversary of Mao's New Year message for 1949. Written on 30th December 1948 and entitled "Carry through the revolution to the end", Mao's message urged the Chinese people to resist Chiang Kai-shek's call for peace talks and to completely overthrow the Guomindang government. The text of the message was subsequently included in the Selected Works vol.4. 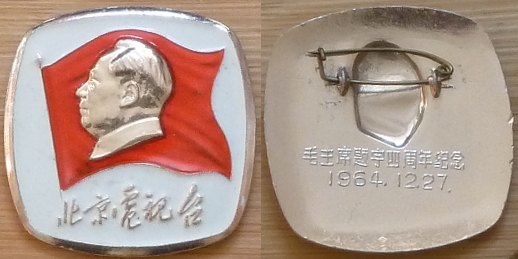 The star-topped structure on this anepigraphic badge is undoubtedly a transmission tower for radio and/or television. The skyline of high-rise buildings and suspension bridge is suggestive of Shanghai but may well be generic. Whatever the location, the "message" is the importance of broadcasting in spreading Mao Zedong Thought. 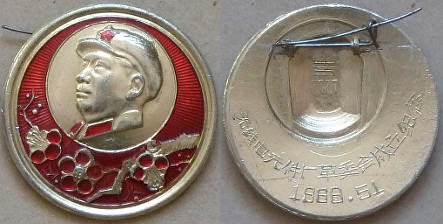 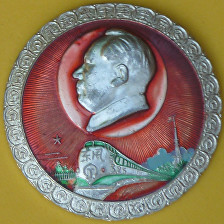 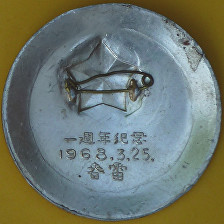 The TV broadcast tower shown in the background of this Spring Thunder badge was situated on Huanzhong Middle Road, Guangzhou.

The above badge issued on May Day 1968 commemorates the establishment of a revolutionary committee at Jilin Radio Components Factory. 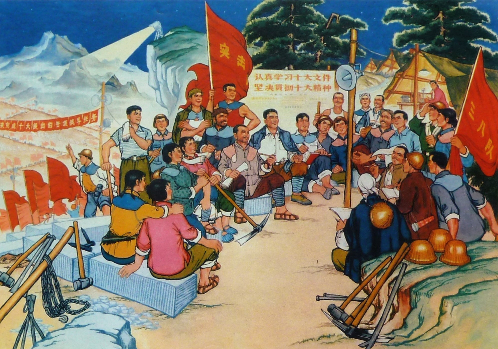 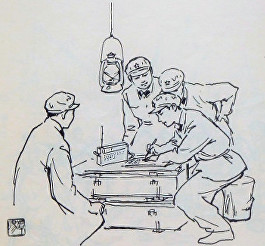 Above: illustration from a 1973 album, Sketches Commemorating the Success of the 10th National Congress

Personal radio receivers were expensive and fairly uncommon items in Mao's China; most people listened to programmes re-broadcast over loudspeakers that were installed in almost every village. During the early years of the Cultural Revolution, possession of a radio might indicate bourgeois tendencies, or a desire to listen to foreign broadcasts.

Access to personal radios was in effect limited to cadres and military outposts; although more than a few send-down youth constructed their own from scavenged components. 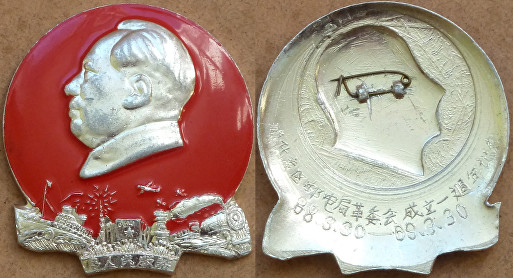 The large badge at right has the obverse inscription, "Serve the People" and is replete with multiple symbols of revolution and modernity. It, was issued to commemorate the first anniversary of the revolutionary committee of the Tonghua Prefecture Post and Telecommunications Bureau.