Although some were necessary for purposes of national prestige, car manufacture had a very low priority in Mao's China and production never exceeded a few thousand vehicles per year.

The badge at right was issued by the Jilin Automobile Standard Parts Factory and depicts a Hongqi CA770. Less than one thousand were made of this model, which was introduced in 1963 and was used to transport high officials and foreign dignitaries. 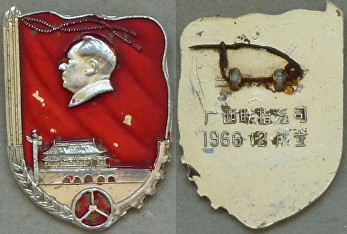 Above left: commemorating (with a rather late reference to the gift of mangoes) the first anniversary of the creation of three revolutionary committees at the Capital Motor Company on 16th February 1968

Above right: issued by (the revolutionary committee of) the Guangxi Union Automotive Company

Left: commemorating the formation of the Guangxi Union Automotive Company in December 1966

Unlike trains, trucks, tractors, wheelbarrows, bicycles, aircraft and ships, cars are absent from masthhead books; they lacked both revolutionary significance and practical value, nor did they play any part in China's foreseeable socialist future.