The red sun rises above Changbaishan

For those living in to the west in Jilin this obverse inscription was, and is, a geographical truth. Changbaishan (Ever-White Mountain) is the tallest peak in the mountains between China and North Korea, and straddles the international border that separates the two countries. 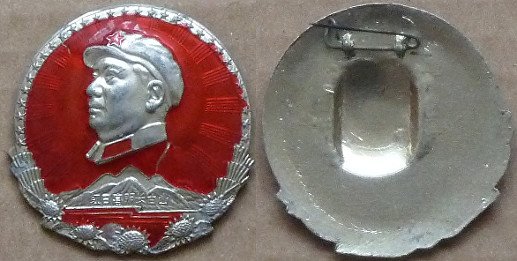 Changbaishan, which is also known by its Korean name (Mount Baekdu or Paektu) is a stratovolcano with a large water-filled crater called Heaven Lake. The eruption of Changbaishan in CE 746 was one of the three largest volcanic eruptions in recorded history and was heard in the then Japanese capital, Kyoto; the volcano has been dormant since its last eruption in 1903. Following local territorial disputes, a 1962 treaty between China and North Korea settled the border and divided the mountain and its lake almost equally between the two countries.

There are several possible reasons for the inclusion of Changbaishan on a Mao badge:

1. It was a prominent landmark and was depicted, like Jiayuguan Fort, to show that the Cultural Revolution had reached every part of China.

2. It represents the continuing friendship between China and North Korea, and indirectly references the intervention of Chinese "volunteers" in the Korean War.

3. A designer with a good understanding of volcanology wanted to equate Mao's Cultural Revolution with the eruptive power of a massive volcano.