Hastily organised during the autumn of 1958, the People's Communes were the final stage of Mao's "path to socialism" in rural China. The first stage after the redistribution of land was a continuation of the wartime policy of mutual aid organisations and co-operatives. The co-operative movement proceeded in fits and starts during the first Five-Year Plan, but at the end of 1955 Mao overrode Central Committee policy and ordered the immediate conversion to collective farms. By the middle of 1956 most of China's rural population had been organised into collective farms. Although collectivisation was accomplished remarkably smoothly, the new farms were plagued by organisational problems and agricultural production did not increase by the anticipated amount. Mao needed a large agricultural surplus to "finance" his Great Leap Forward in industrial output, and in August 1958 he persuaded the Central Committee to authorize the establishment of much larger communes. By the end of 1958 some 750,000 collective farms had been amalgamated into about 24,000 People's Communes, thus accomplishing the "transition to communism" in the Chinese countryside. One result of these rapid transitions was that the countryside was ill-equipped to meet the ever increasing demand as the Great Leap accelerated. 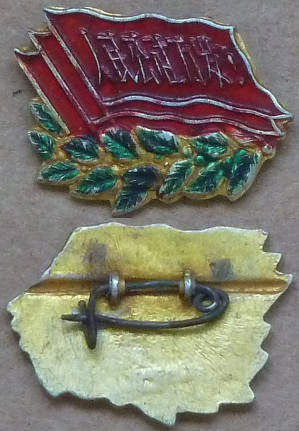 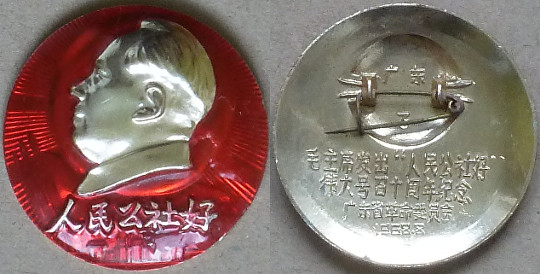 At left: the obverse inscription, "The People's Communes are Good" is located above the facade of the Peasant Movement Training Institute (Guangzhou's main claim to a place in the Mao myth). The reverse inscription dated August 1968 commemorates the 10th anniversary of Mao saying those words (although that exact phraseology does not occur in the English translation of The Selected Works).

Below: the reverse inscription commemorates the first anniversary of the Revolutionary Committee of the Nanyuan (Southern Park?) Commune.

Following the failures of the Great Leap, the communes were reorganised into about 75,000 units that became the basis for rural administration under a centralised command structure. However, it was Liu Shaoqi's reintroduction of individual private plots, and the right to sell private produce, that effectively saved the rural economy; by the mid-60s private produce accounted for about one third of rural income. A few urban communes had been established in 1958, and they were briefly revived in 1960, but none survived beyond 1961.

The People's Communes were one of the Three Red Flags of socialist development (seen behind Mao's portrait at right). In the context of the Cultural Revolution, support for the communes signified opposition to the "capitalist roaders" occupying high positions in the Communist Party.