Construction workers were visually under-represented during the Cultural Revolution; on posters and in masthead books they are vastly outnumbered by steel workers, oil workers, mine workers, and factory workers. The image at the bottom of this page is therefore quite unusual; together with the three other pictures featuring cranes, it represents the totality of construction-related imagery in eight Cultural Revolution-era masthead books.

There are several possible reasons for this lack of visibility. Construction sites lack the permanence of steelworks, oilfields, mines, and factories; and construction crews are even more temporary than the sites, with labour being drafted in and out as required. Additionally most of the prestige construction projects, as opposed to civil engineering such as bridges, had been completed in time for National Day 1959. The construction of ordinary housing and office blocks could not compete with the drama and revolutionary romanticism of the blast furnace or an underground mine shaft. 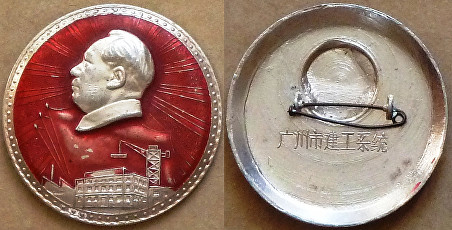 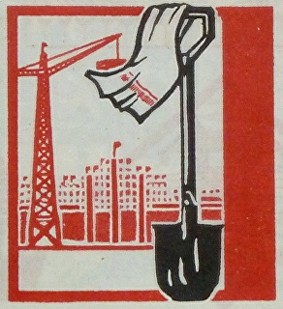 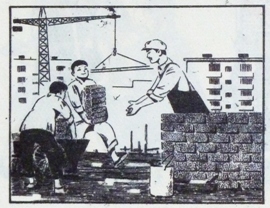 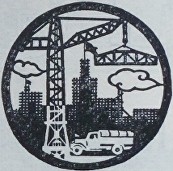 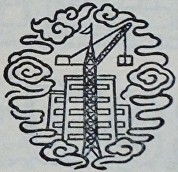 Images of buildings under construction carried an interpretive risk; a half-finished building could imply that something (the nation, the government, or the revolution) was incomplete and not ready for use. Similarly, scaffolding (suggestive of instability) is completely absent from officially sanctioned images.

It was also the (inevitable) case that not all workers had the same status. While construction workers were by no means on the bottom rung, a bricklayer, no matter how skilled or experienced, was apparently not perceived as making the same contribution to the New China as someone working in the extractive industries or on a production line.

The badge at left was issued by the Housing Construction Section of the Nanning-Luizhou Railway Office, and has the China Railways logo in the centre of the reverse.

The badge below was issued 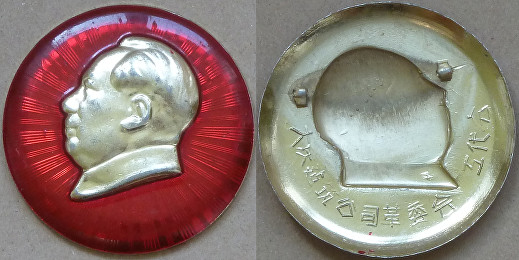 The badge at left was issued by the Daqing Construction Company Revolutionary Committee Workers' Congress.