Unlike contemporary paintings and posters Maozhang did not portray the huge piles of produce that signified agricultural abundance. Some badges issued during the first year of the Cultural Revolution instead portrayed a variety of crops with the slogan, "All living things depend on the sun", the metaphorical meaning of which is clear. However, the sunflowers shown on the badges are merely an oil-producing crop and do not represent the Chinese people. 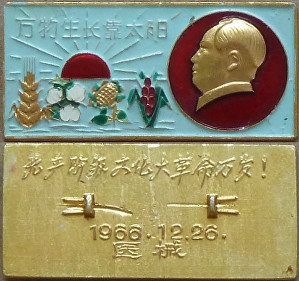 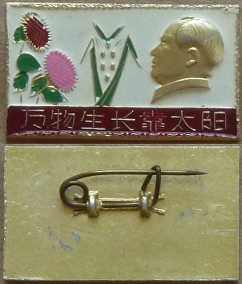 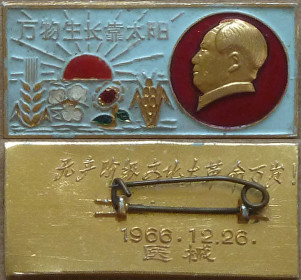 On the three badges above, only wheat and cotton are consistently coloured in a "natural" way. Sunflowers are pink and red, and on the middle example maize appears to have been mistaken for the sacred lily (Rohdea japonica). These may be simple errors, perhaps encouraged by urban painters' unfamiliarity with rural produce; or it may have resulted from a revolutionary enthusiasm for the colour red.