The People's Liberation Army Film Studio was established on 1st August 1952, and in 1956 was renamed the August First Film Studio. In December 1965 the Central Military Commission redesignated the sections responsible for producing original material, as opposed to the subtitling of foreign films, as the (PLA's) General Political Bureau of Film-makers. During the Cultural Revolution a revolutionary committee was set up in April 1968 and in September of that year the unit was renamed as the People's Liberation Army August First Film Studio. The two badges below were issued prior to April 1968 by the General Political Bureau of Film-makers. 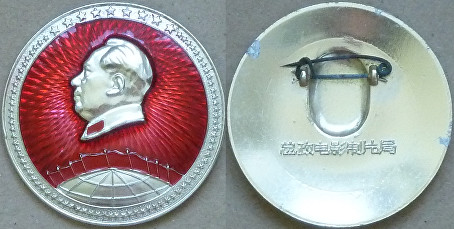 In addition to training films and documentaries on military subjects, such as China's first atom bomb test, the army's film unit also made feature films. Prior to the Cultural Revolution their output included: Five Heroes on Langya Mountain (1958), Tracks in the Snowy Forest (1960), Doctor Bethune (1964), and Tunnel Warfare (1965).

During the Cultural Revolution studios became increasingly involved with making film versions of model revolutionary works. Below are a December 1969 Xinhua promotional poster and a still from the Beijing Film Studio's version of Taking Tiger Mountain by Strategy, which takes its plot from the novel (subsequently filmed) Tracks in the Snowy Forest.

The loyalty badge at left carries the inscription "Serve the People" on a "ribbon" of film, complete with sprocket holes and divided into frames. It seems likely that it was issued by one of the many propaganda units that travelled the countryside showing films to the rural population. It is more than likely that these films were the first moving images that many in the audience had ever seen. 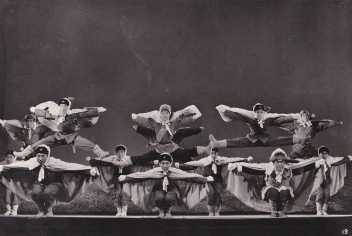 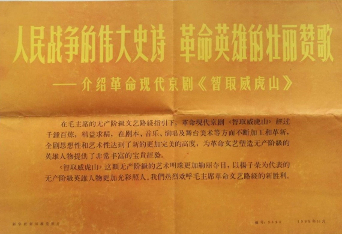 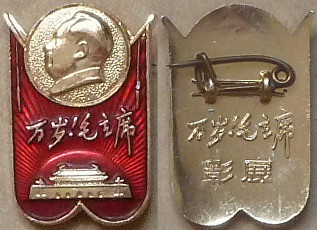 The badge at right commemorates a film festival; perhaps held in Hong Kong because the obverse and reverse inscriptions appear to have physically reconstructed the most widely used phrase in Cultural Revolution China according to an Anglicised(?) syntax. Instead of "Mao Zedong wansui!", the Chinese characters read "Wansui! Mao Zedong" i.e. "Long live! Mao Zedong".