This bud-shaped badge acclaims the establishment of the Guangdong Province Revolutionary Committee and shows the Haizhu Bridge at Guangzhou. Completed in 1933, this was the first bridge to span the Pearl River (Zhujiang) at Guangzhou. It was damaged during the Anti-Japanese War and again by retreating Nationalists at the end of the War of Liberation. Communist forces crossed the Haizhou Bridge on 15th October 1945, signifying the liberation of Guangzhou.

The Haizhu Bridge features on this stamp celebrating the liberation of Guangzhou, issued in November 1949 by the South China Postal Service before its amalgamation into the People's Regional Post. 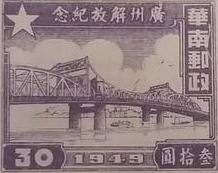