On this badge the usual seven sunflowers are replaced by hibiscus blooms. The reverse inscription reads:

"The land of hibiscus glowing in the morning sun" (the final line of Mao's poem Reply to a Friend) Glorious 1969".

There was perhaps an element of provincial boosterism intended when this badge was commissioned. Hunan was traditionally known as the "land of hibiscus"; and Mao Zedong was that province's most famous, and most powerful, native son.

"Glorious 1969" most likely refers to the 20th anniversary of the founding of the Peoples' Republic of China in 1949. 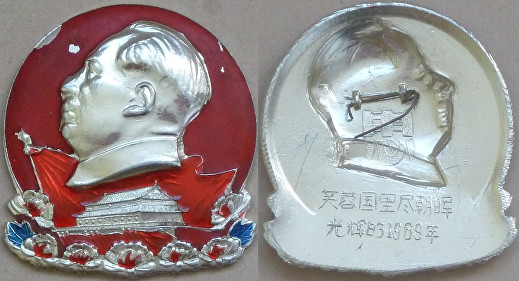 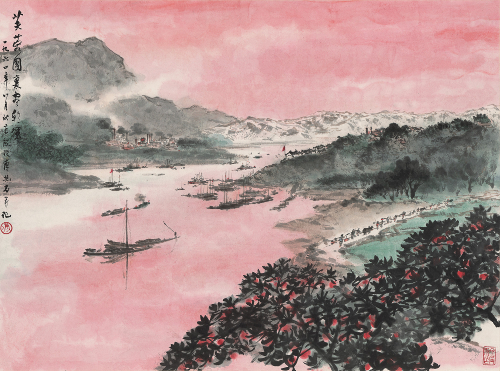 Riding the wind, the Princesses descend the green hills.

Once they speckled the bamboos with their myriad tears,

And I am lost in dreams, untrammelled dreams

Of the land of hibiscus glowing in the morning sun.

*The friend was the poet, historian. and high-ranking government official Guo Moruo.

Translation taken from The "May 7" Collection of Terms and Expessions (Chinese-English), The Revolutionary Committee of Central China Normal University, Wuhan 1968

Left: The Land of Hibiscus Glowing in the Morning Sun is the title of a 1963 painting by the artist Fu Baoshi (1904-65). Although it was not the poet's intention, the "morning sun" in the picture (and on the badge) could be interpreted as references to the "big red sun" - Mao himself.