Unlike operas, ballets and orchestral symphonies, there were no official model revolutionary novels. One that came close was Hongyan (Red Crag) by Luo Guangbin and Yang Yiyan, published in 1961. Set in Chongqing during the tense months preceding Liberation, Hongyan is a tale of clandestine warfare between heroic Communist agents and the brutal Nationalist counter-espionage apparatus.

The book was immensely popular, was reprinted many times and sold more than 10 million copies; a film adaptation was released in 1965. Jiang Qing made plans to turn Hongyan into a model opera, but then cancelled the project on the grounds that in 1949 many of Sichuan's party members had been supporters of Mao's rival Wang Ming.

The three badges below clearly refer to the novel, reproducing with varying success the front cover (although the film may have used the same imagery), but the circumstances of their production is unclear - promotional badges for novels or films were not a typical feature of China in the mid-1960s.

Front cover of an early edition 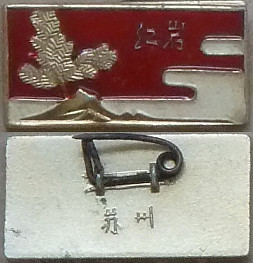 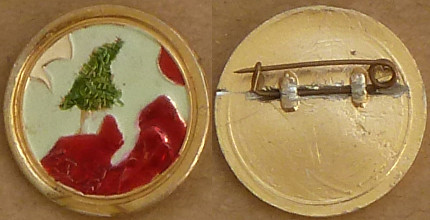 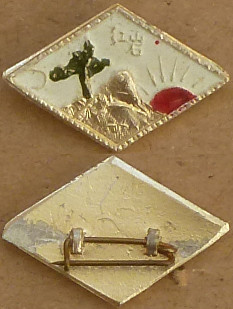 The badge at right has the obverse inscription, "Long Live Chairman Mao", and was made by the Shanghai No. 3 Handicrafts Factory. The mountain and tree are not rendered in relief, and it seems likely that the Hongyan motif was painted on, with or without approval, subsequent to factory production.