"We must fix the Huai River"

The Huai is a large river in central China that now flows into the Yangtze via Hongze Lake; the lower course is prone to serious flooding. One part of the fix was the construction of the 250-kilometre New Bian Canal that diverted water from the main channel directly into Lake Hongze, roughly following the course of earlier canals constructed during the Sui and Tang dynasties. Work on the New Bian Canal started in 1966 and involved some 450,000 labourers. This badge was issued by the office responsible for their accommodation on the Anhui stretch of the canal. 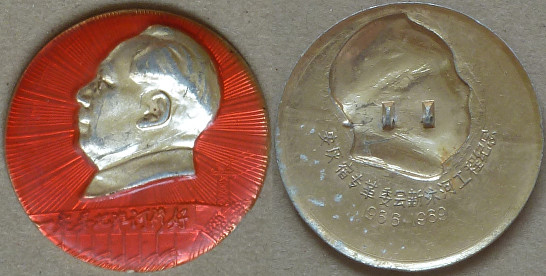 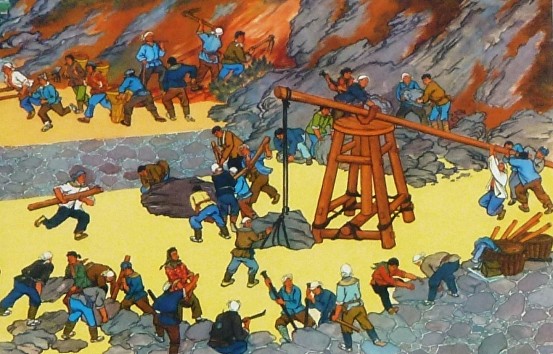 Completed in 1970, by which time the production of commemorative Maozhang had ceased, the New Bian Canal lacked the fame and spectacle of the Red Flag Canal; it was nevertheless a major project finished in good time despite, or because of, the Cultural Revolution.

Although they were undertaken supremely practical reasons, canals, dams, and other water-management projects also conformed to one of the underlying themes of Mao Zedong Thought: taming and shaping the natural world to meet the needs of the people. Such projects, involving the mobilisation of hundreds of thousands of temporary labourers, were the embodiment en masse of "The Foolish Old Man Who Moved Mountains".

Detail from "The great struggle against crooked valleys and rivers", a c.1973 artwork by Liu Zhide, who was perhaps the most professional of the Huxian amateur peasant painters. Although it is an idealised piece of "good news" propaganda, it accurately represents the combination of human effort and basic equipment that was employed on projects such as the New Bian Canal.