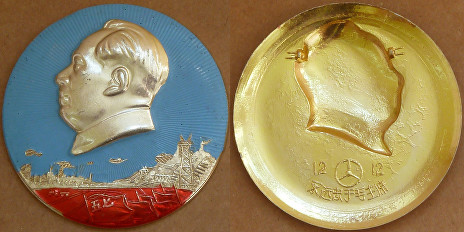 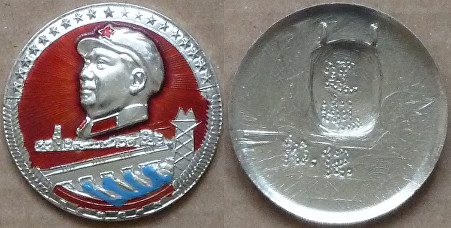 When dams are depicted on Maozhang, visual emphasis is usually placed on their capacity to generate electricity.

On the badge at right, from Lankou in Henan, the dam and inevitable pylon are in the background with an orchard of fruit trees dominating the foreground.

The badge at right commemorates the tenth anniversary of Chairman Mao's visit to the Three Gorges on 30th March 1958.

The dam shown bridging the steep sides of a gorge reflects Mao's ambition and vocal support for such a project rather than any reality. A massive dam across the Changjiang was too great a task even for the Great Leap Forward, and construction work on the Three Gorges Dam did not start until the mid-1990s.

The badge at left was issued by the Liaoning Electric Power Bureau.

The dam cannot be positively identified and may well be stereotypical. However, the rock formations in the "skyline" below Mao's portrait are most likely intended to represent the Bingyu Valley, which has the province's most distinctive riparian landscape.

The example at left was issued by a transport unit (1212 perhaps) to commemorate the May 7th directive.

On one side, a dam and its associated pylons are depicted in a rural setting of terraced fields; the stylized sloping roofs and chimneys of heavy industry occupy the other, presumably urban, side.