During the summer of 1966, Red Guards pretty much had the Cultural Revolution to themselves; from the beginning of autumn, workers became involved and formed mass organisations that dwarfed in size even the largest Red Guard units. As more and more workers became involved, the locus of revolutionary innovation shifted from Beijing to Shanghai - China's industrial centre and a hotbed of radical "leftist" ideas. In Beijing, the Cultural Revolution had been enacted almost entirely against individuals, from senior officials, cadres, and teachers to shopkeepers and street pedlars. In Shanghai the workers aimed at nothing less than the overthrow of the entire municipal apparatus. 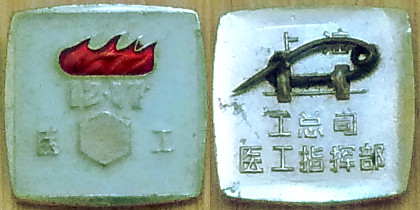 The driving force behind events in Shanghai was the Workers Revolutionary Rebels General Headquarters (WGHQ) founded at the beginning of November. Frustrated in their attempts to send a delegation to Beijing, known as the Anting Incident, the workers prepared for local action.

The badge at right commemorates medical workers joining the WGHQ in December 1966.

In response the Shanghai Party Committee had recruited its own mass organisation, the "Scarlet Guards". On 30th December 1966, some 20,000 Scarlet Guards clashed with a much larger group of WGHQ outside the party headquarters. The rebels won this first street battle that pushed the Cultural Revolution to new levels of violence, and which established a new model of revolutionary behaviour. On New Year's Day 1967, events unfolded very rapidly.

At 1:00 am the commander of the Shanghai Garrison ordered the workers' militia units to be disarmed. Two hours later Zhou Enlai telephoned Shanghai's party secretary and ordered him to regain control of the situation. At 5:00 am the party secretary convened a meeting of the leaders of the WGHQ and other rebel mass organisations who drafted an open letter calling for the people of Shanghai to grasp revolution and smash the bourgeois reactionaries. It took several days for the test of the letter to be agreed and it was published in newspapers on January 5th, but it was already too late for Shanghai's party committee.

At left, a victory badge at left issued by the WGHQ 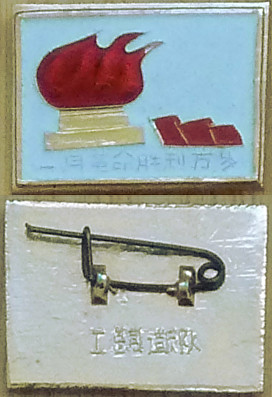 On 4th January two members of the inner Cultural Revolution steering group arrived In Shanghai. They instructed rebel workers and students to take over the city's newspaper offices and broadcasting stations, and organised a mass rally to demand the overthrow of the municipal party committee.

On 6th January a crowd of more than 100,000 gathered in Shanghai's People's Square to listen to speeches denouncing the local party leadership. Several individuals were "struggled against" and the whole rally was broadcast on live television.

On 9th January an alliance of 32 rebel organisations in Shanghai published their proposals for reorganising the city's local government. Mao read and approved these proposals, and Zhou Enlai sent an official telegram congratulating the Shanghai rebels.

On 12th January the text of the telegram was read out on Central Radio, which prompted a WGHQ relay station in Shanghai to start its morning broadcast early with the excited announcement, "To rebel is justified".

On 16th January Mao formally approved the Shanghai rebels' seizure of power - the overthrow of both the Shanghai Party Committee and the municipal government. The function of these two organisations was to be combined into a new form of local government. On 5th February the Shanghai Commune (named for the 1871 Paris Commune) was declared at a mass rally in People's Square. Although Mao approved the form of the new organisation, he did not like its name and Commune soon became Revolutionary Committee. 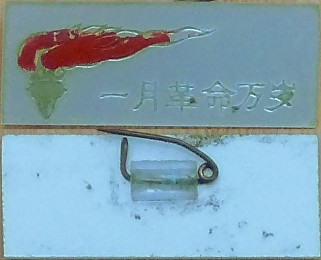 The events in Shanghai - the "January Storm" - plunged China into a chaotic turmoil that would last until the summer of 1968. With smiling encouragement from the very top, power seizures, violent clashes between mass organisations, and the establishment of revolutionary committees occurred all over the country at every level of government and in schools, hospitals and factories. China was almost ungovernable until the PLA restored order with a heavy hand. 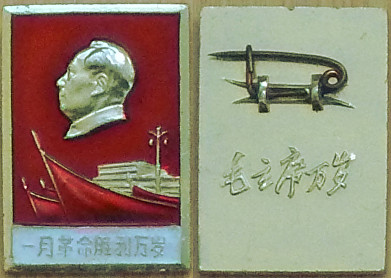 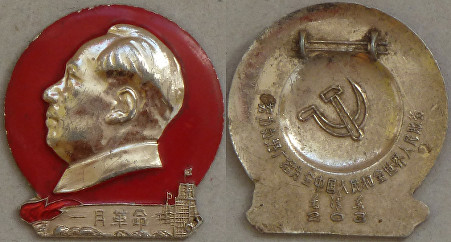 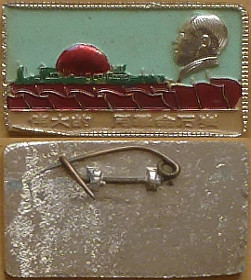 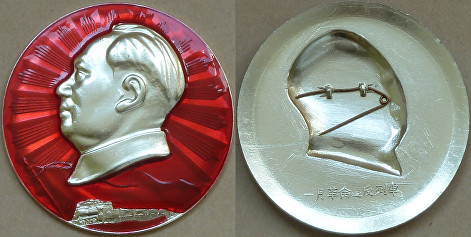 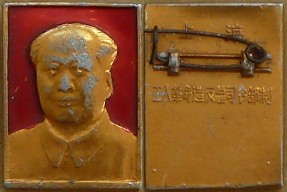 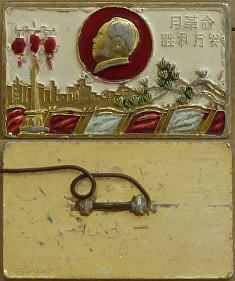 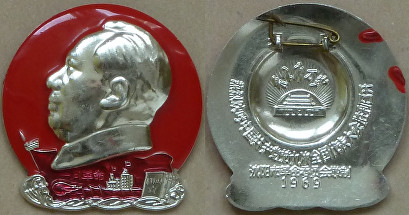 Many of the badges celebrating or commemorating Shanghai's January Revolution feature the city's distinctive architecture. 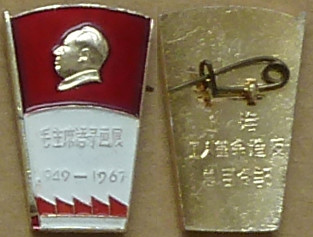 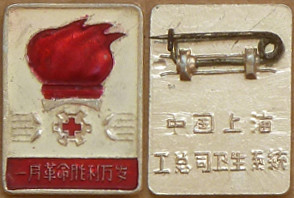