Kangda is the abbreviated acronym for

the Chinese People's Anti-Japanese Military and Political College. The first Kangda was formally established in Yan'an in 1937 to train army officers and cadres. Subsequently additional colleges were set up in other liberated areas, and became known as Kangda 2, Kangda 3 etc. The college was renamed in January 1937. 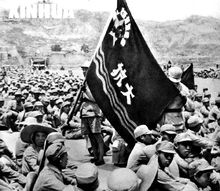 The plastic badge at right reproduces the college flag (left) with the distinctive horseman-star badge below the college motto, "Be united, alert, earnest and active".

The slogans on the paper envelope that contained the badge (far right) indicate that it was produced during the Cultural Revolution, probably as a visit souvenir.

Entrance to the Chinese Resistance Against The Japanese Red Army College, Yan'an 1936

Above: another souvenir from an exhibition commemorating Kangda. An unusual feature of the reverse is the stylised ethnic "Shanghai" in cursive joined-up Western script.