The reverse shows Jinggangshan bathed in radiance from a single five-pointed star.  Conventionally, the star is a symbol of socialism/communism; but in this case it may indicate that just as Mao was seen as the sun by day, he could also be seen as a star by night. To compare Mao to the Moon would have been unthinkable because of the waxing and waning nature of its appearance. 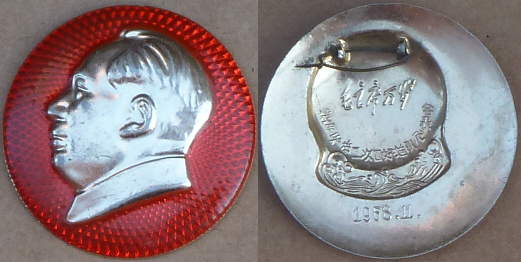 Waves of revolution, whipped up by the east wind, is a common visual metaphor that invokes the image of China's population as a human sea. Contrary to Cultural Revolution policy on the visual arts the waves, like the Jinggang mountains, are depicted in a stylized fashion that shows the influence of traditional Chinese landscapes.