A lighthouse, in both realistic and fanciful forms, appears on some Maozhang. As a symbol it combined two key propagandist narratives: maritime (the ship of state, the Great Helmsman, waves) and illumination (the red sun, the torch of revolution).

The badge at right was issued by PLA unit 4402, almost certainly a naval unit. The numerals on the ship's bow, 3-03, are unlikely to represent a date and probably identify an individual vessel. 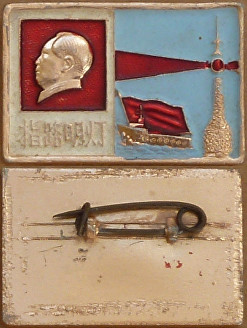 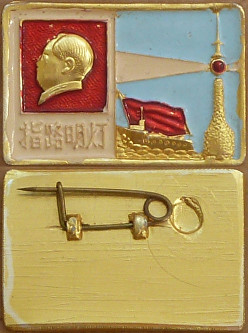 At left, two examples of a widely issued design with a lighthouse towering above a red-flagged ship of state. The obverse inscription reads "Guiding Light" - a phrase equally appropriate for the lighthouse and for the Great Helmsman himself.