The Long March has become enshrined as a key element in the foundation myth of New China, the People's Republic, and the lifework of Mao Zedong.

Described as the greatest strategic retreat in history, the relocation of the Red Army from southern Jiangxi to northern Shaanxi was both a material and moral victory; one that has been endlessly exploited by the Party's propagandists.

During the Cultural Revolution, many thousands of enthusiastic "pilgrims" retraced the route of the march to demonstrate their revolutionary fervour. 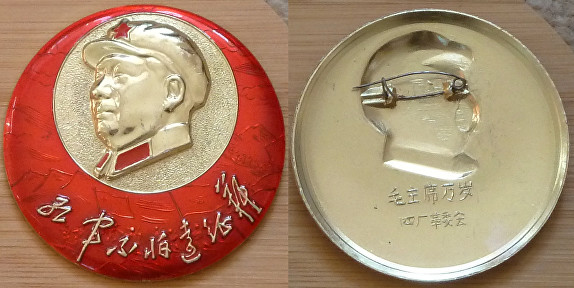 The badge above shows columns of soldiers marching through mountainous terrain and carrying the original Red Army flags bearing the hammer and sickle inside a star. The obverse inscription quotes the opening line of Mao's poem, "The Red Army fears not the trials of the Long March".

The same flag appears on the badge at left which according to the reverse inscription was issued (presumably to participants) for a symbolic long-distance run to commemorate the Long March. The obverse names Beijing (the location of the run?) and depicts Yan'an, the symbolic endpoint of the Long March. 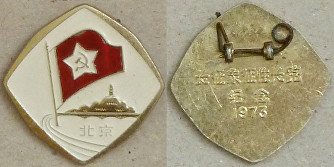 The maps in the 1967 version of the Atlas of China: General Edition were rearranged to make room for a map that was not included in previous years. This new map - the only historical map in the atlas - is a detailed and annotated map of the Long March ending in October 1936.

"The Red Army fears not the trials of the Long March" 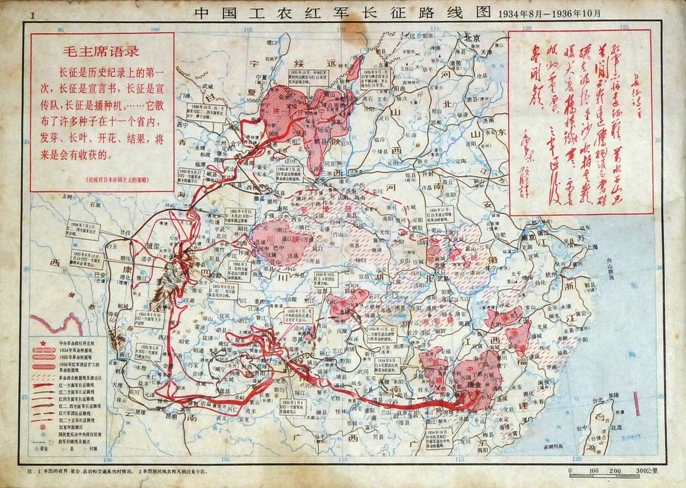 Befitting its mythical status, details of the Long March are sometimes vague, sketchy, and perhaps open to question.

One example of this is its duration - in time, rather than in li, miles or kilometers. During the 1950s, standard Chinese accounts had the Long March completed within twelve months (October 1934-October 1935) and ending when Mao reached Wuchichen near Yan'an. By the mid-1960s, the standard account extended the Long March to 10th October 1936 when the Communist First and Fourth Armies celebrated their capture of Huining in Gansu. In his 1985 account Salisbury ends the Long March when Zhu De and Zhou Enlai are reunited with Mao at Bao'an on 2nd December 1936.