The newly formed Mao-Zhu army won its first major victory on 23rd June 1928 when it defeated a GMD attack aimed at the Jinggangshan base. Three advancing GMD regiments were intercepted by a much smaller communist force, many of whom were armed only with spears or long knives, at Longyuankou about 20 km north of Maoping. Superior numbers and firepower gave the GMD an initial advantage but, after several hours of bitter fighting over difficult terrain, the communists were able to encircle and "annihilate" one GMD regiment while the other two retreated in disarray.

Victory at the Battle of Longyuankou gave a tremendous boost to the prestige of the Mao-Zhu alliance and provided them with 1,000 much-needed rifles captured from the enemy. 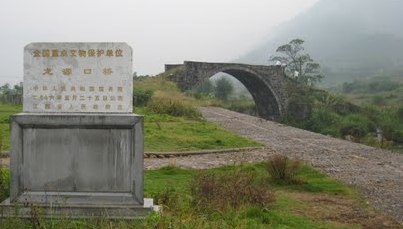 The bridge at Longyuankou is 33 metres long and was completed in 1837.

Although it is somewhat obscure today, Longyuankou would have been familiar to Maozhang wearers; the landmark bridge at Longyuankou was featured on banknotes and stamps.