"We have only millet plus rifles to rely on" 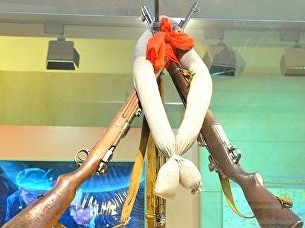 It is a longstanding truism that an army marches (and fights) on its stomach; but there is more to Mao's repeated mention of "millet plus rifles" than this simplified truth. The phrase emphasised the peasant base that supported the Red Army, and perhaps even preferenced the agrarian over the military during the People's War. Futhermore, millet represented more than mere calories. Millet (xiaomi) was the ancestral staple of North China, and as such was deeply rooted in the regional (nascent national) sense of identity.

Chinese soldiers carried their millet in long tubular bags. These bags are depicted on badges with a rifle and one of Mao's books, visually communicating Mao's well-known phrase. 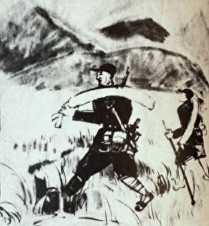 At left, millet bag, red scarf, and rifles on display at the Yan'an Memorial Hall Museum

At right, millet bag carried by a Red Army soldier during the Long March, drawn by Huang Chen and first published in Sketches of Travels to the West, Shanghai 1938