Quite logically the opening skirmish of the Great Proletarian Cultural Revolution took place in the realm of culture - specifically public performances. Conventionally this is dated to the published criticism of Wu Han's historical drama Hai Rui Dismissed from Office for using the past to criticise the present. To some minds however, the Cultural Revolution had begun several years earlier. In February 1966 Mao's wife, the former actress Jiang Qing, convened a Forum on Art and Literature in the Armed Forces at which she stated that a Cultural Revolution had already been underway for three years. Jiang was forbidden from political work but had, with the support of Lin Biao, manouevred herself into the position of unofficial cultural supremo. Her most significant achievement was the creation and promotion of the so-called Eight Model Works. 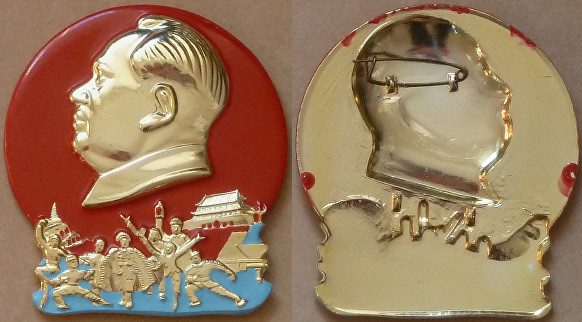 This badge can be "read" according to Jiang's theory of the Three Prominences. Mao is obviously the most prominent character in both size and position. In the foreground, and next in prominence, are characters from each of the Eight Model Works, with Li Yuhe holding the red lantern being the tallest. At the lowest rank of visual prominence are Yan'an (at far left) and Tiananmen. In the model works the third rank of prominence was reserved for "bad" characters, here however the two sites represent the historical, revolutionary and political authority that underlay the Eight Model Works and, in a wider context, the Cultural Revolution.

Traditional Chinese operas - populated by royalty, aristocrats and supernatural beings - were extremely popular; with Peking opera widely considered to be the "national" style. Rooted in China's feudal history, these operas were deemed unsuitable for a socialist nation, but they could not be banned until replacements were available. At a 1964 conference on modernising the content of Peking opera Jiang gave a lengthy and detailed speech criticising traditional content and explaining how suitable works could be achieved. Three years later Jiang announced the completion of the first eight revolutionary model works - five operas, two ballets, and one piece of symphonic music.

Revolutionary modernism was apparent both in content and in form: elements of Western culture - ballet and orchestral instruments, most notably the piano - were incorporated in keeping with the dictum of "letting the foreign serve China".

Raid on the White Tiger Regiment

This 1969 poster portrays Jiang Qing illuminated by Mao Zedong Thought and surrounded by vignettes of the Eight Revolutionary Model Works. 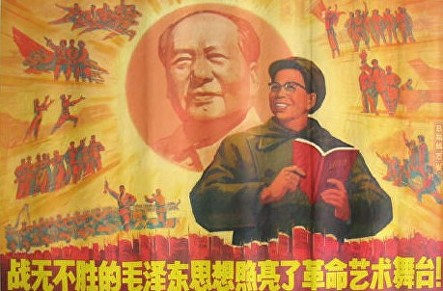 The Eight Model Works were deemed the only ones sufficiently correct for public performance and, although several other model works were subsequently approved, the monopolistic position of the original eight is often cited as a shining example of the stifling of cultural activity during the Cultural Revolution. 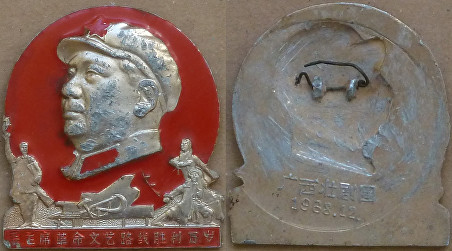 The badge at right has the obverse inscription, "Long live the success of Chairman Mao's revolutionary line on literature and art", and features three of the model works (or four if the piano-accompanied version of The Red Lantern is considered a separate work). Note the hammer, sickle and rifle superimposed on the piano.