These seven badges comprise a set issued by People's Pictorial magazine. Although many sets were made up of badges of identical size and shape, alternative configurations (as illustrated here) were not uncommon. The badge at right, the largest, is the set "leader" with the name of the issuer inscribed on the reverse. The next five badges, each with a different border design, depict the revolutionary sacred sites most closely associated with Mao. Note that his portrait above Tiananmen is larger than that above the other sites. The set is completed by a "quotation" badge, in this case Lin Biao's, "Making revolution depends upon Mao Zedong Thought." 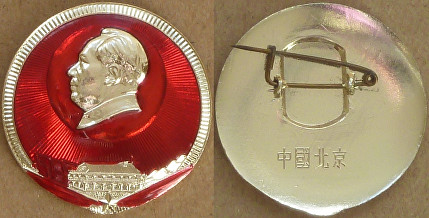 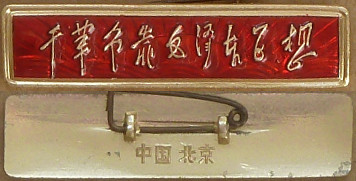 People's Pictorial (also known as China Pictorial) was established in 1950 and was one of the few officially permitted publications during the Cultural Revolution.

Left: The cover of People's Pictorial issue 1. The masthead title, which the magazine retains today, is in Mao's calligraphy. 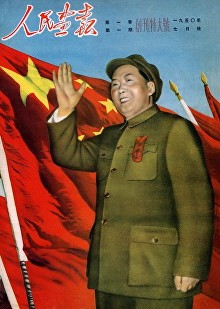