This badge depicts migratory seabirds flying over Qinghai Lake (Blue Sea Lake), which used to be known in English as Kokonor. Qinghai Lake is the largest lake in China and gave its name to the province in which it is located. Qinghai Lake is slightly saline and alkaline owing to the fact that it has no outflow.

Issued by the Qinghai Provincial Revolutionary Committee within Qinghai Military District, the obverse of the badge carries no overt revolutionary message other than, implicitly, that the red sun rises over Qinghai Lake. 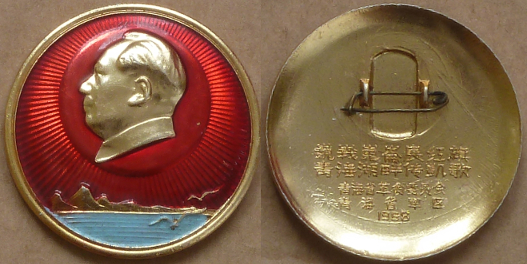 The reverse inscription is probably unique and requires some explanation.

The first line, "Towering Kunlun shows a red flag", is not a reference of Mao's poem Kunlun and may simply be an acknowledgement that the Cultural Revolution has spread as far as the Kunlun Mountain range at the opposite end of Qinghai Province to the lake. However, a mythical Kunlun Mountain features prominently in traditional Chinese belief, and was the supposed site of the Daoist paradise. Consequently the red flag on Kunlun may signify the victory of the new (Communism) over the old (traditional belief).

The second line, "Qinghai Lake legend", has no discernible revolutionary significance. There are various legends concerning the origin of the lake. According to one legend the lake grew from a spring that was blocked by the Erlang Hero during his pursuit of the Monkey King. Another legend states that the lake was originally a magic mirror cast aside by the Tang-era Princess Wencheng. In Tibetan Buddhism, the lake is a home to deities and there is an annual sacrifice ritual presided over by eight "Living Buddhas".