Red Ribbon on the Earth

This Maozhang, which references the crossing of the Great Snowies, presents in visual form the idea of the Long March as a red ribbon on the surface of the Earth. 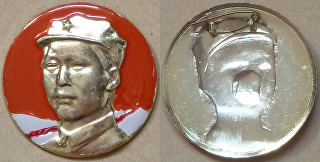 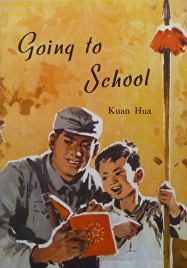 I first encountered Shen Yayoi as the illustrator of Kuan Hua's children's story Going to School (Foreign Languages Press, Beijing 1975), an uplifting piece of soft propaganda featuring the Eighth Route Army. Partly through the principle of "investigate everything" and partly through a longstanding interest in graphic art and comics, I researched the web and discovered Shen's oil paintings and his illustrated version of WeiWei's 1987 novel Red Ribbon on the Earth.

Shen's version is in effect a graphic novel, although that term is perhaps inappropriate because it does not conform to the Western concept of the graphic novel format, which is essentially a pumped-up comic book with multiple graphic panels per page and speech balloons. Instead, Shen's Red Ribbon follows the "traditional" format of the Chinese lianhuanhua, with a single image per page (or double page spread) accompanied by a small amount of running text. 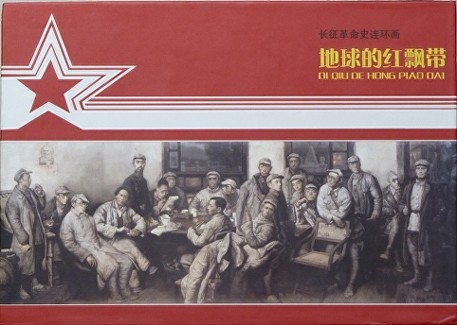 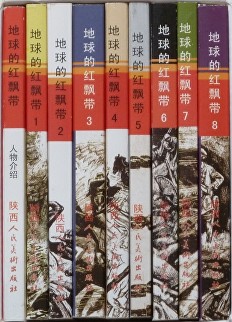 Red Ribbon on the Earth tells the story of the Long March through 926 images in eight consecutive volumes, with an introductory volume that contains indentifying portraits and biographies of 64 named characters. Volume One opens on 30th November 1934 as the bulk of Red Army is about to cross the Xiang River, and subsequent volumes follow the march through Zunyi, over the bridge at Luding, and across the Great Snowies and the Grasslands. Volume Eight concludes in September 1935 after the Red Army had descended the Lazikou Pass and marched into Hadapu, and ends with a brief coda in which this news is given to Chiang Kai-shek. Many of the pages are datelined, so although I cannot read Chinese I was able to follow the action by referring to Salisbury's account; although the nuances of personality, relationships and emotions that enriched WeiWei's novel remain beyond my grasp. 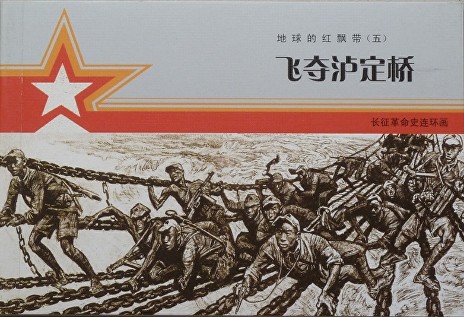 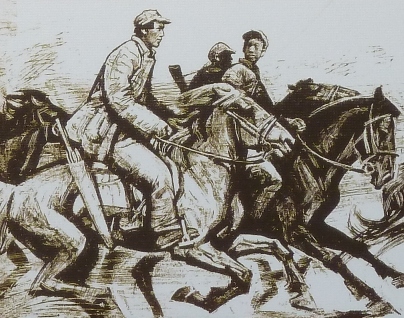 Left: The cast of characters from the cover of the introductory volume

Below left: Cover of volume 5, the assault on Luding Bridge

Below: Mao on horseback, from the cover of volume 3, note the iconic umbrella

Like Salisbury and WeiWei before him, Shen retraced the route of the Long March and made numerous sketches of landscapes and buildings some of which formed the basis for images that are remarkably rich in details of architecture, interiors, costume and vegetation. His other sources of reference were contemporary photographs. Shen's graphic style is difficult to pin down. The photorealism of some of the portraiture places his work firmly in the bottom left-hand corner of McCloud's comic style triangle*, while a better overall description might be Mao's preferred socialist romanticism, particularly evident in the treatment of landscape and vegetation. However, many of the scenes and figures, particularly the soldiery, seem strongly influenced by the Yan'an woodcut school. Perhaps the best description is to say that through a combination of talent, skill, and experience Shen produced a Mao-era masterwork.