The Red Guards - with their armbands, Little Red Books and propensity for violence - gained worldwide notoriety as the mass embodiment of the Cultural Revolution.

Under China's pre-1966 educational system a record of political activism was a prerequisite for university entrance; it is therefore unsurprising that the first Red Guards - volunteer guardians of Mao's revolutionary line - emerged from an elite Beijing secondary school. Discreet and approving words were uttered, and the Red Guard concept spread like a prairie fire; first to Beijing's colleges and universities, and within a few weeks to educational institutions across the whole country.

Subsequently at a series of huge rallies in Tiananmen Square, Mao very publicly endorsed the Red Guards and entrusted these "red inheritors" - the young generation that had grown up enjoying the benefits of his own hard-won revolution - with the task of carrying through the Cultural Revolution to the end. 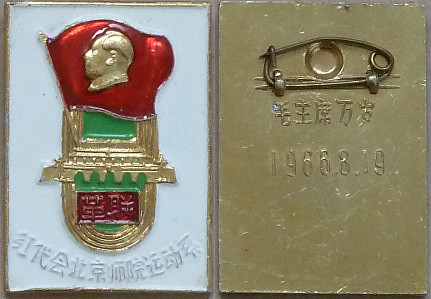 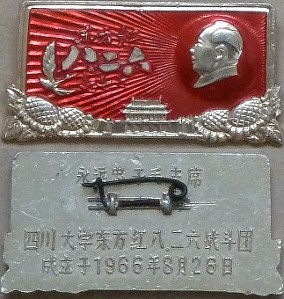 The badge above left was issued by Red Generation, a Red Guard unit from Beijing Normal University Department of Physical Education. It commemorates the first mass rally, at which Mao accepted and wore a Red Guard armband.

The badge above right records the formation of The East is Red August 26th (8.26) Combat Team at Sichuan University.

At left: The ship of state steered by the Great Helmsman - Dandong Red Guards

At right:  The obverse design mimics the star badges that were issued to the PLA. Many other groups both official and unofficial used this design.

Some Red Guard badges, such as those below, used commonplace obverse designs and it is only the reverse inscriptions that reveal their association with Red Guards. It is probable that "off-the-shelf" obverse dies were paired with specially cut reverse dies. 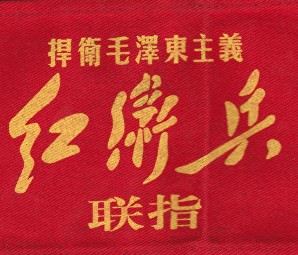 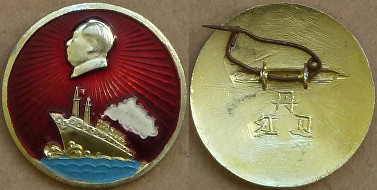 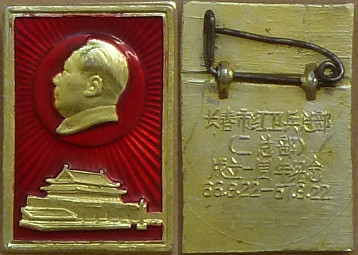 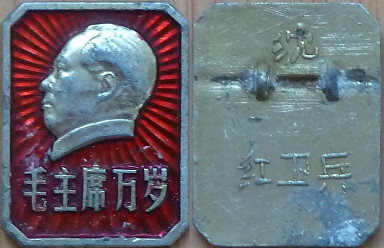