The two badges beneath carry obverse inscriptions in Mao's calligraphy taken from a 1963 poem, his second Reply To Comrade Guo Moruo. The badge at left has the half-line, "The Four Seas are rising". The badge at right, issued by the Nanning Fire Brigade, has two full lines, "The Four Seas are rising, clouds and waters raging, The Five Continents are rocking, wind and thunder roaring." 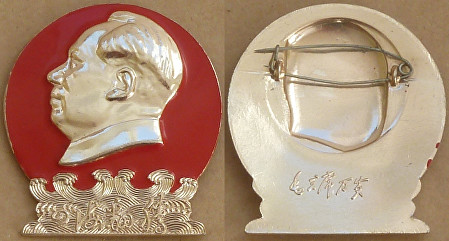 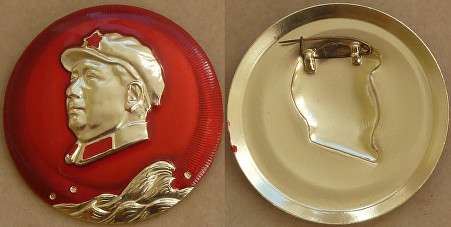 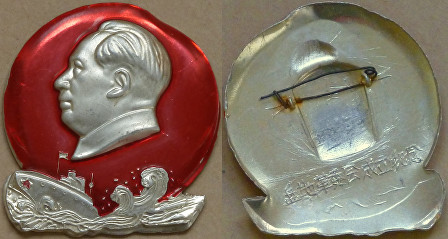 On this tiny globe

A few flies dash themselves against the wall,

Ants on the locust tree assume a great-nation swagger

And mayflies lightly plot to topple the giant tree.

And the arrows are flying, twanging.

So many deeds cry out to be done,

The world rolls on,

Ten thousand years are too long,

Seize the day, seize the hour!

The Four Seas are rising, clouds and waters raging,

The Five Continents are rocking, wind and thunder roaring.

Our force is irresistible,

Away with all pests!

When the seas are in turmoil

Heroes are on their mettle.

Can shore up the falling heavens

And create order out of the reign of chaos.

The world hears the cock crowing

And day breaks in the east.

Gold is not pinchbeck

And can stand the proof of flames.

Show us the way.

How absurd for Chieh's dog to bark at Yao;

The clay oxen plunge into the sea and vanish.

The red flag of revolution is unfurling in the east wind,

The universe is glowing red.

The design of the above badge appears to suggest (no doubt inadvertently) that rising seas, or a tsunami of revolution, may present a threat to the smooth voyaging of the ship of state.