Although not explicitly named, it is fairly certain that the mountains depicted on these badges are the Great Snowy Mountains - one of the major obstacles crossed during the Long March. The sunflowers on the badge below left are a clear indication that triskaidekaphobia was not prevalent in Mao's China. 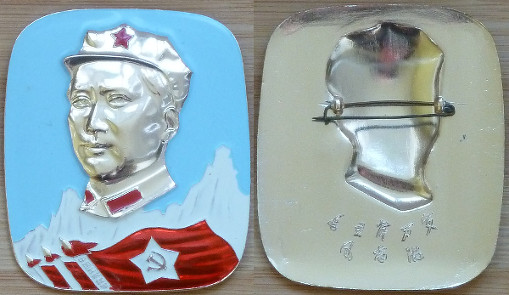 Mao employed a degree of poetic license when he assigned Minshan a thousand li (500 km) of snow. Minshan was the final peak on his route across the Great Snowies, separated from the other peaks by the desolate and marshy Grasslands.

The three flags on the badge above suggest that the mountain behind them is intended to be Minshan itself. After descending Minshan, Mao's forces joined up with two other Red armies before continuing their march northward.