Spring thunder is associated with the third solar term of the traditional Chinese calendar - the "Awakening of Insects" - when the land shakes off the grip of winter and animals emerge from hibernation. The sound of spring thunder is most frequently heard in the south of the country, but early spring thunderstorms also occur as far north as Beijing.

During the Cultural Revolution the symbolic aspects of spring thunder - sudden, loud, herald of change and renewal - were appropriated and exploited by a number of groups, including the central authorities.

The first spring thunder of the Cultural Revolution was heard in Guizhou. On 25th January 1967, following the example of Shanghai, the Guizhou Proletarian Revolutionary Rebel Command "seized power" and overthrew the provincial and municipal party committees. On 1st February the People's Daily published an editorial entitled "Spring Thunder in the Southwest" that praised and endorsed the rebels' action.

On this Guizhou badge the title of the editorial, flanked by the date 1967.1.25, is inscribed below a standard rural trope of terraced fields, dam, and electricity transmission tower. 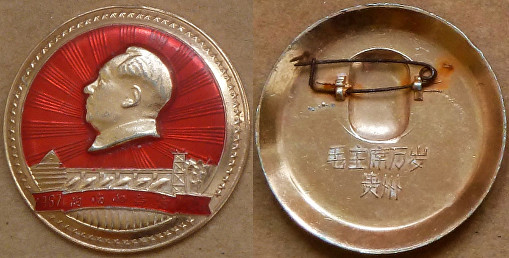 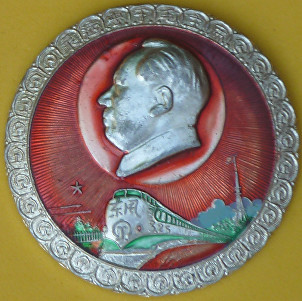 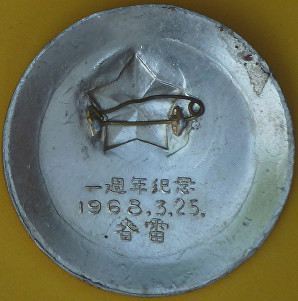 In Guangzhou, Spring Thunder was a "conservative" organisation of skilled railway workers, cadres and train engineers, a part of the East Wind faction that set up a revolutionary committee on 25th March 1967 supported by the PLA.

Factional struggle continued and the PLA changed sides. By the summer of 1968 the East Wind had been displaced by the rival Red Flag faction.

This badge, issued by Spring Thunder, commemorates the first (and only) anniversary of their "victory", and has the China Railways logo around the border. The TV broadcast tower shown in the background was situated on Huanzhong Middle Road, Guangzhou.

Among other instances of revolutionary "Spring Thunder" at this time were:

In Chongqing, Spring Thunder were a militant group at the Southwest Teachers' College allied to the August Fifteenth faction. In June 1967 Spring Thunder became involved in a four-day battle when the teachers' college was attacked by a rival faction, the Smashers (subsequently known as the Rebel to the End faction).

On 5th July 1967 the People's Daily published an editorial entitled "Spring Thunder Over India" that gleefully reported how an uprising by "revolutionary peasants" in the village of Naxalbari in Begal would provide the spark, "that will certainly set the vast expanses of India ablaze".

The revolutionary fire did indeed spread throughout the Darjeeling area but was soon extinguished by Indian security forces; however the "spark", in the form of Naxalite-Maoist insurgents, was to become a continuing, albeit relatively minor, threat to the government of India.