The vast majority of the billions of Maozhang stamped from aluminium alloy bear one of three left-facing "standard" portraits of Mao in profile, with his neck covered by a jacket collar. By far the most common of these is the bare-headed "civilian" image that appeared on the cover of some editions of his writings. The other two standard portraits have a distinctly military flavour, as does a much less common fourth variant. 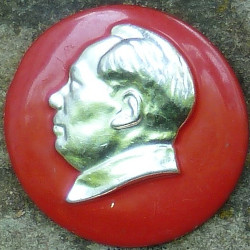 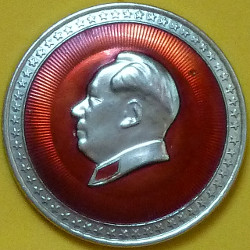 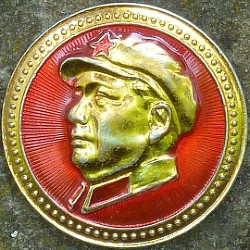 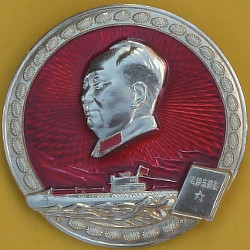 This impassive profile is the face that launched the Cultural Revolution. The image dates from the early 1950s and is firmly in the Western tradition of coinage portraiture. On Maozhang it is usually modelled in high relief to emphasize a good head of hair swept back from a high forehead, and incidentally setting a leadership hairstyle that persists to the present day.

The civilian portrait militarized by the addition of officers' rank tabs which are moulded onto the collar in addition to being coloured red.

A complete reworking of Mao's image. In addition to the baggy cap with red star, his face is turned slightly to the left so that his right eye is partially visible. Although the cap is of different design, this portrait deliberately echoes Snow's famous image of a much younger Mao.

This portrait, more in keeping with Mao's actual age, was not used on Maozhang before 1968. Maintaining the same "turned-to-the-left" inclination of the head as the earlier soldier portrait, the absence of a cap reveals a receding hairline.