The communists began manufacturing cloth and clothing at Yan'an during the Anti-Japanese War*; Mao and his comrades were justly proud of the uniforms they presented to members of the Dixie Mission. After Liberation, textile production remained an essential industry, although it was not given the same prominence as steel and oil.

The badge at right is an example of cultural appropriation by the PLA. The mangoes featured on the obverse were specifically given to representatives of the "workers and peasants"**, while the inscription below reads, "PLA Soldiers Forever Loyal to Chairman Mao". The badge was issued by PLA Unit 7788 operating the Red Guard Textile Mills under "military authority". 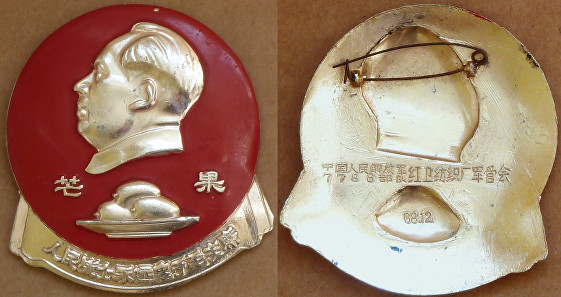 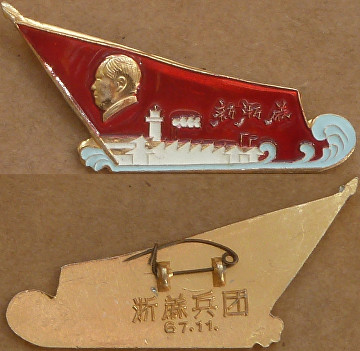 The badge at right depicts and names the New Zhejiang Jute Mill in Hangzhou with its distinctive zigzag roofline. Processing locally grown jute, the mill was the first state-owned factory in post-Liberation Zhejiang and was built with unprecedented speed in order to meet the urgent requirement for sacks for the distribution of foodstuffs and for military sandbags. The production line opened in August 1950, just 10 months after construction began.

The New Zhejiang Jute Mill was an extremely successful example of an import-substitution enterprise. In its first full year of operation the mill produced some 6 million sacks, effectively ending the PRC's dependence on sacks imported from the UK and India. The speed of construction and the success of the mill - it contributed about 12% of Hangzhou's income and its sacks were stronger and more durable than imported ones - were hugely influential in building people's confidence in socialism and the emergent socialist economy.