The two badges below both incorporate Mao's Little Red Book, perhaps even (at left) as one of the towers on the wall; the significance of the commemorated date, March 20th, is unknown. The inclusion of aircraft (at right) reinforces the idea of the Great Wall as a symbolic line of defence; the PRC's defences extended far to the north of the wall. 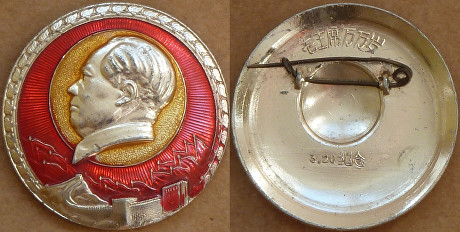 Shi Lu's painting was singled out for praise when shown at a National Art Exhibition in 1955. Shi was considered one of the few artists able to combine the subject matter of socialist-realism - a family of peasant shepherds and their flock startled by a train approaching from the right - with the materials and techniques of national painting (guohua). The message of modernity brought to remote regions could be elucidated even by those unfamiliar with artistic debates. A subsequent commission, entitled Fighting in Northern Shaanxi, was much less successful. Executed in a much more traditional style, it was rejected when Shi refused to repaint it. During the Cultural Revolution Shi was persecuted by Red Guards. 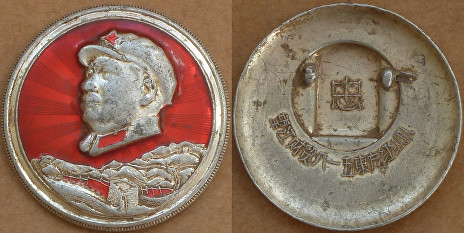 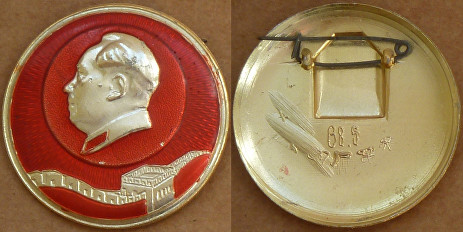 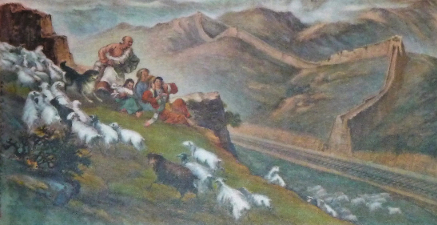 Beyond the Great Wall (cropped) by Shi Lu

The two badges above share an unusual aerial view of the wall and its towers. The one at right was issued in Wangjiang, Anhui by the Dongfanghong (East is Red) Column of the Fifteenth August (815) Red Guards.

The badge at left carries the "Great Wall" quotation from Mao's poem Liupanshan*:

"We are not heroes until we reach the Great Wall"

* for full text of the poem see: Winds