The East Wind Prevails Over the West Wind 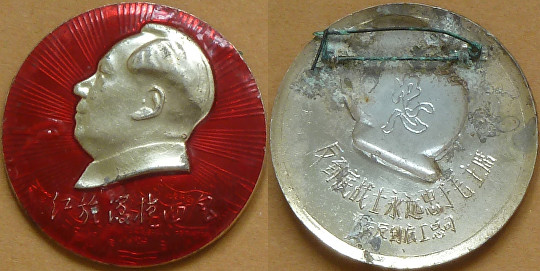 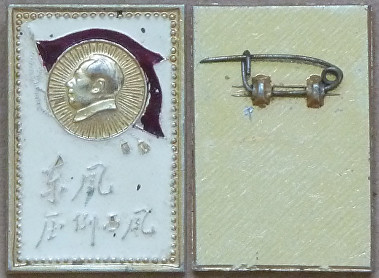 The sky is high, the clouds are pale,

We who have already measured twenty thousand li

High on the crest of Mount Liupan

Today we hold the long cord in our hands,

When shall we bind fast the Grey Dragon?

The slogan inscribed on the badge at right is based on a phrase from Mao's speech to Chinese students in Moscow, just two weeks after the successful launch of Sputnik 2.

Mao was in Moscow to attend the 40th anniversary celebrations of the 1917 revolution. Although very unhappy with Krushchev's "secret speech" condemning Stalin and the new Soviet policy of peaceful co-existence with the West, Mao was in 1957 still prepared to acknowledge the Soviet Union as the world leader of socialism.

By the time this badge was issued during the Cultural Revolution, the Sino-Soviet split had occurred, the Soviet regime denounced as "bourgeois revisionists", and Mao had assumed the role of socialism's world leader. For the makers and wearers of the badge there was no doubt that the East Wind was blowing from China.

The obverse inscription on the badge at right is a line from Mao's poem Liupanshan (Mount Liupan), written in 1935 towards the end of the Long March. The "Grey Dragon" may refer to the Japanese invaders, or to the Nationalist government.