In 1955 construction of a massive metallurgical complex began in the Qingshan district of Wuhan. In 1958 the Wuhan Iron and Steel Company (abbreviated to Wugang) was formally established, and the badge at right was probably issued at this time.

During the Cultural Revolution a power struggle between Red Guards and rebel workers and the "conservative" Million Heroes faction was exacerbated by uncertainty about the role and allegiance of PLA units. In July 1967, during the notorious Wuhan Incident, a senior cadre sent from Beijing was kidnapped and beaten while Mao himself was making an secret visit to the city. A semblance of order was only restored when Zhou Enlai flew to Wuhan to ensure the Chairman's safety and take personal charge of the situation. 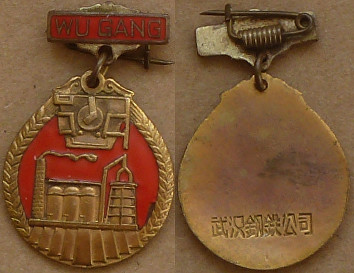 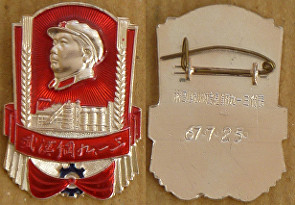 Right (lower): Badge issued by the "Steel-Tempered September 13th" commemorating that their representatives had been received by Vice-Chairman Lin Biao. 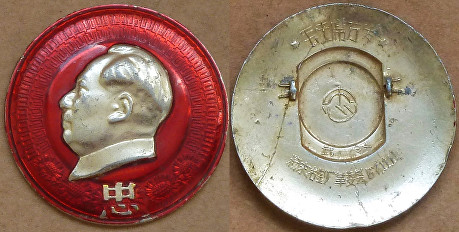 The concentration of heavy industry in Qingshan is reflected in the names of its sub-districts, which include: Red Steel, Steel City Park, Molten Steel Spark Village, Workers' Village, and In Front of the Factory.

The badge at left was issued to commemorate the establishment of a revolutionary committee in Red Steel.

The loyalty badge at right, issued by the Wuhan Powder Metallurgy Plant, incorporates the "loyalty" character into the obverse border and also displays a highly stylized version on the reverse.