Of all the titles heaped upon Mao the only one he was happy to accept was that of Great Teacher. On the badge at right the inscription describes Chairman Mao as "Our Great Teacher".

The organised (and supervised) study of Mao's writings began in wartime Yan'an with the recognition of Mao Zedong Thought as the foundation of CPC ideology. It was revived by the Socialist Education Movement and reached a climax during the Cultural Revolution. 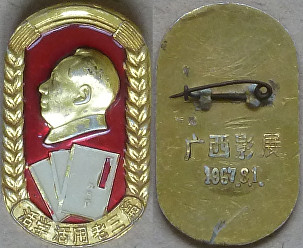 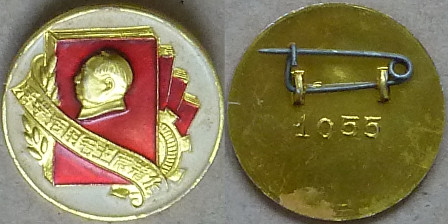 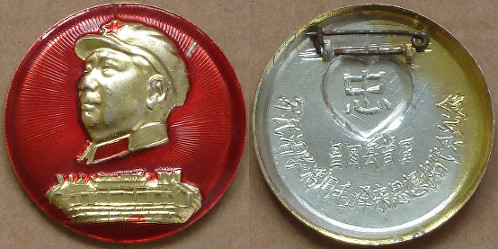 In the early 1960s the People's Liberation Army under the direction of Lin Biao took the lead in promoting the study of Mao's works - the Quotations was intended for military use only. Although the above badge displays the party flag and the four volumes of the Selected Works in a global context, the inscription's atypical use of the possessive pronoun probably refers to the issuer, PLA unit 4529, and by extension to the whole of the armed forces.

The two very similar badges above have the same inscription, "Actively study and apply Chairman Mao's works". While both portray the four volumes of the Selected Works (Volume One is clearly identified on the badge at right), the inscriptions use a general term for literary works rather than specifying the Selected Works.

This badge commemorates Changtu County's first joint civil-military Actively Study and Apply Mao Zedong Thought Activists' Congress, and depicts a locally notable building, perhaps the site of the congress. Hundreds of Mao Zedong Thought Activists congresses were held at all levels of the administrative hierarchy; many were exclusively military and often restricted to just one branch of the armed forces.