In the summer of 1966 the newly formed Red Guards at Qinghua University had resisted the Work Teams sent by the party; and subsequently they had been legitimized when Mao ordered the Work Teams withdrawn and control handed back to the student Red Guards.

By the summer of 1968, however, Mao had become thoroughly disillusioned with the Red Guards. Not even the supposedly brightest brains at Qinghua could avoid the pitfalls of violent factionalism. He could no longer entrust the future of his Cultural Revolution - the future of the nation - to China's intellectual elite; and if educated youth could no longer be trusted, then control must be handed over to the proletariat represented by the Workers' Mao Zedong Thought Propaganda Teams. 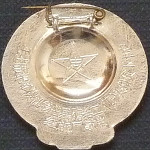 Whether it was a carefully considered message, or a sudden and spontaneous act of generosity, the "gift of the mangoes" was given maximum publicity by the party apparatus.

While the masses celebrated Mao's apparent generosity, those in the know will have been only too aware of the subtext - and none more so than the leaders of Beijing's largest Red Guard groups. At the end of July, five of them were summoned by the Chairman and harangued at length: the Red Guards had accomplished their mission and it was time for them to go.

The Red Guards were finished and the future of China's educated youth was down in the countryside.