These plastic replicas are detailed enough to grace the shelves of any doll's house library, with their red covers wrapped around inset white pages.

An unusually high proportion of these Maozhang were made with English titles, which underlines the wide-ranging propaganda effort to spread Mao's philosophy beyond the borders of China.

Originally produced as an aid to political education in the PLA, the Quotations from Chairman Mao Tse-tung rapidly became a cult item while it was still for "internal circulation only". Mao himself was ambivalent about this collection of decontextualized snippets from his Selected Works, and somewhat reluctantly approved it for public distribution in autumn 1965. The Quotations became the "Little Red Treasure" of the Cultural Revolution, waved aloft in celebration and adulation of the Great Helmsman, or clasped to the heart in a gesture of love and loyalty.

The Quotations - first edition of the definitive text, August 1965 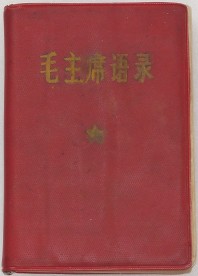 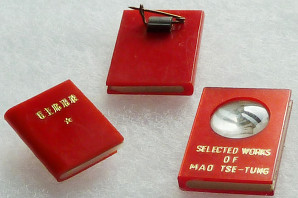 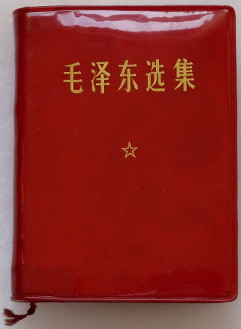 The first volume of the Selected Works of Mao Tse-Tung was published in 1951. Volumes 2, 3, and 4 were published in 1952, 1953 and 1960. They were first published as a single 1406-page edition in 1964. The Selected Works formed the basis of Mao Zedong Thought from the beginning of the Socialist Education Campaign of 1962 through to the end of the Cultural Revolution, and every household was expected to have at least one set. The individual volumes were initially produced with white card covers with the title in a red rectangular block, and the Selected Works are often depicted like this on Maozhang. Later editions followed the same outward visual style as the Quotations, and by 1970 the two were indistinguishable from a distance.

A 1970 edition of the Selected Works produced for the PLA

*All reverses are blank

It was probably intentional that the Selected Works badges were consistently larger than those of the Quotations.